Is there a simple way to check...

Today we shall install RAKwireless WisBlock to check the packets transmitted by our LoRa Sensor.

We'll be testing WisBlock with a LoRa Sensor built with the PineCone BL602 RISC-V Board...

Many thanks to RAKwireless for providing the WisBlock Connected Box! 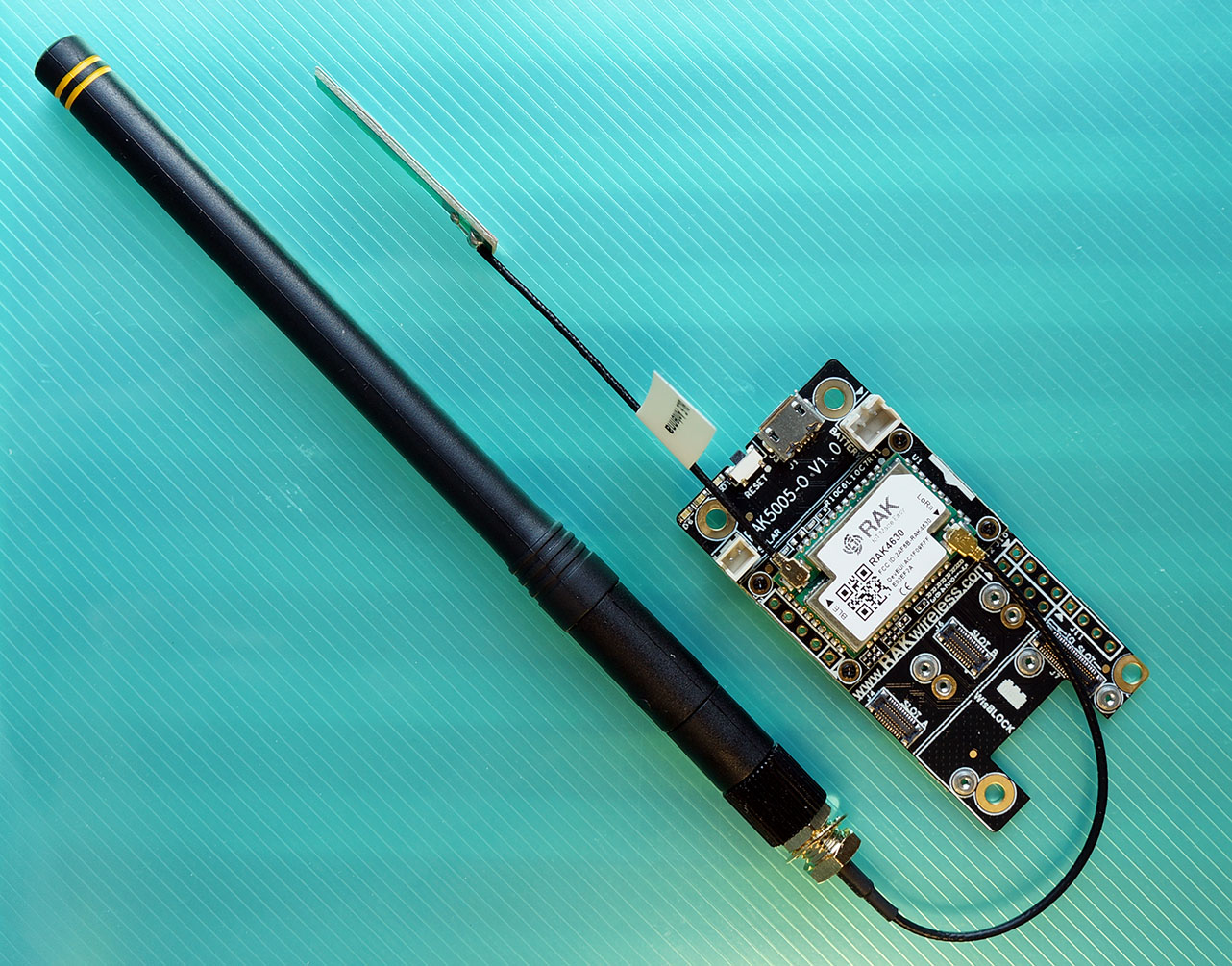 Connect the following components according to the pic above...

The above components are shipped in the WisBlock Connected Box. (Which includes many more goodies!)

For the LPWAN Module, be sure to choose the right LoRa Frequency for your region... 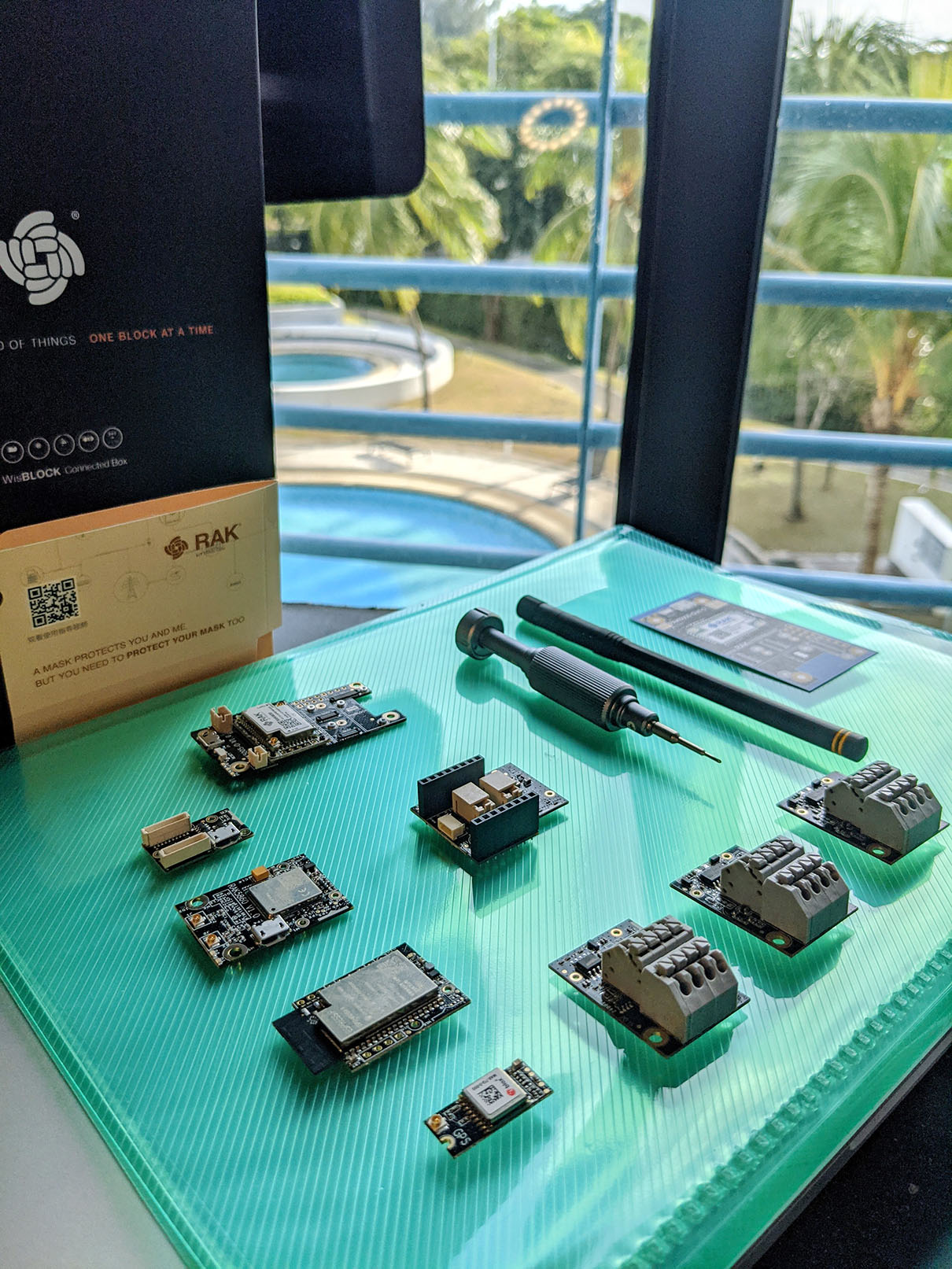 WisBlock is based on the powerful nRF52840 Microcontroller. Do we program it with FreeRTOS, Zephyr, Mynewt, ...?

Here's the surprisingly thing about WisBlock... We program WisBlock with Arduino! (C++)

The Arduino Drivers for Semtech SX1262 will work fine with WisBlock.

(Most other Arduino Drivers will run fine too!)

But Arduino doesn't support Multitasking... No?

Here's another surprisingly thing about WisBlock... WisBlock Arduino is based on FreeRTOS!

(Technically: WisBlock is based on the Adafruit nRF52 Arduino Framework, which is based on FreeRTOS. See this)

So Multitasking Firmware coded in FreeRTOS will run fine on WisBlock.

Let's see what happens inside the Setup and Loop Functions for our WisBlock LoRa Receiver.

In the Setup Function, we start by initialising the LoRa Module and the Serial Port: main.cpp

Next we set the Callback Functions that will be triggered by the LoRa Driver...

The Callback Functions are...

We initialise the LoRa Transceiver and register the Callback Functions with the LoRa Driver...

Then we set the LoRa Parameters for receiving the packets...

These must match the LoRa Parameters used in our LoRa Transmitter. (More about this later)

The timeout value RX_TIMEOUT_VALUE is set to 3 seconds.

After calling the Setup Function, the Arduino Framework calls the Loop Function repeatedly to handle events.

At the start of the Loop Function, we handle the Callback Functions triggered by the LoRa Transceiver: main.cpp

Finally we yield control to FreeRTOS, to allow other tasks to run...

The code in this article is based on the (now obsolete) WisBlock LoRa Receiver Example: LoRaP2P_RX.ino

We have prepped our WisBlock LoRa Transceiver to receive packets... Let's watch how we handle the received LoRa Packets.

The Callback Function OnRxDone is triggered by the LoRa Driver whenever a LoRa Packet has been received successfully.

First we show the Timestamp (in seconds), Signal Strength and Signal To Noise Ratio: main.cpp

We pause a short while and copy the received packet into our 64-byte buffer RcvBuffer...

RcvBuffer is defined as a 64-byte buffer...

Then we display the 64 bytes received...

Finally we ask the LoRa Driver to receive the next packet...

The timeout value RX_TIMEOUT_VALUE is set to 3 seconds.

Looks kinda crowded... We show everything in a single line?

Yes because we'll be copying and pasting the lines into a spreadsheet for analysis.

This way it's easier to scrub the data.

We've set the Receive Timeout to 3 seconds. What happens if we don't receive a LoRa Packet in 3 seconds?

The LoRa Driver will trigger our OnRxTimeout Callback Function: main.cpp

We don't do much in OnRxTimeout because it's perfectly OK to time out... We don't expect a LoRa Packet every 3 seconds.

All we do in OnRxTimeout is to ask the LoRa Driver to receive the next packet...

The LoRa Driver triggers our Callback Function OnRxError whenever it receives a corrupted LoRa Packet.

(Likely due to interference or weak signal. Or an itchy finger powered off the LoRa Transceiver during transmission)

We show the Timestamp (in seconds) for troubleshooting and analysis: main.cpp

And we ask the LoRa Driver to receive the next packet... 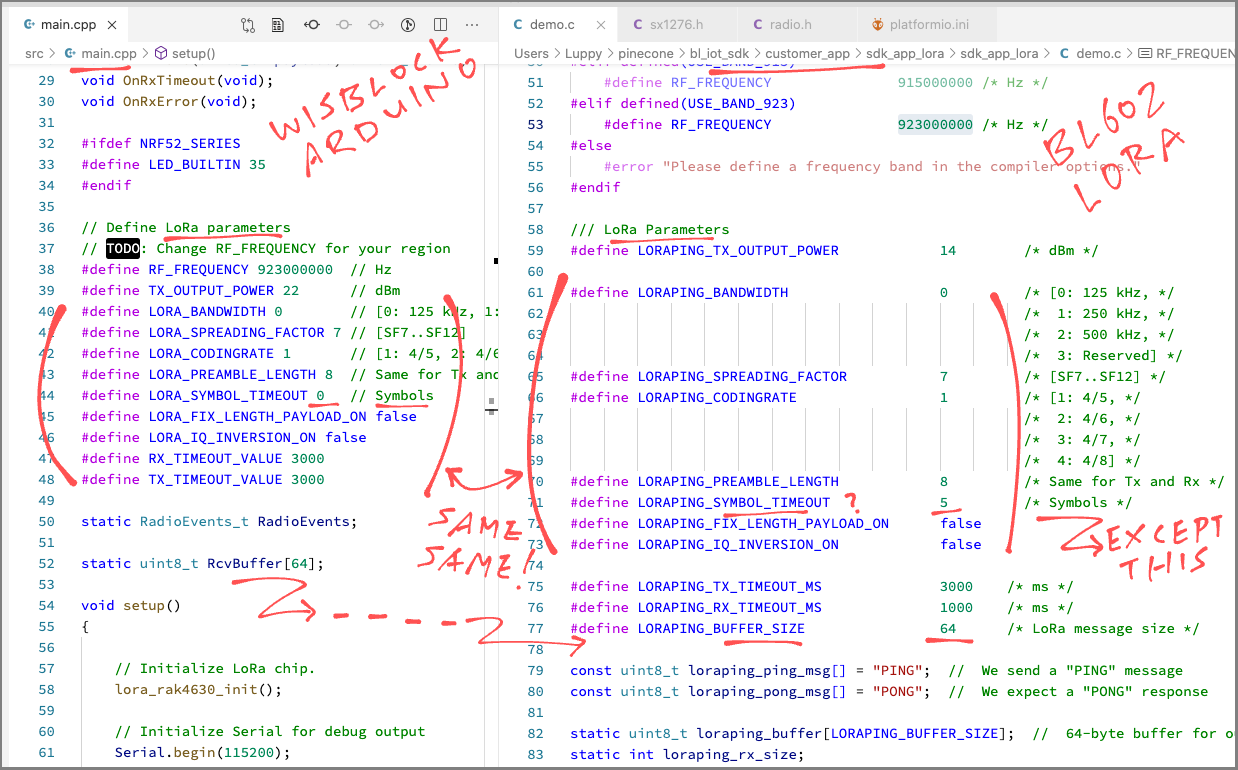 Our WisBlock LoRa Receiver must be configured with the same settings as the LoRa Transmitter... Or we won't receive any LoRa Packets!

Here's the LoRa Configuration for our WisBlock LoRa Receiver: main.cpp

Fortunately the LoRa Configuration matches perfectly across our WisBlock Receiver and PineCone BL602 Transmitter... So nothing needs to be changed! (See pic above)

(Except for the LoRa Frequency) 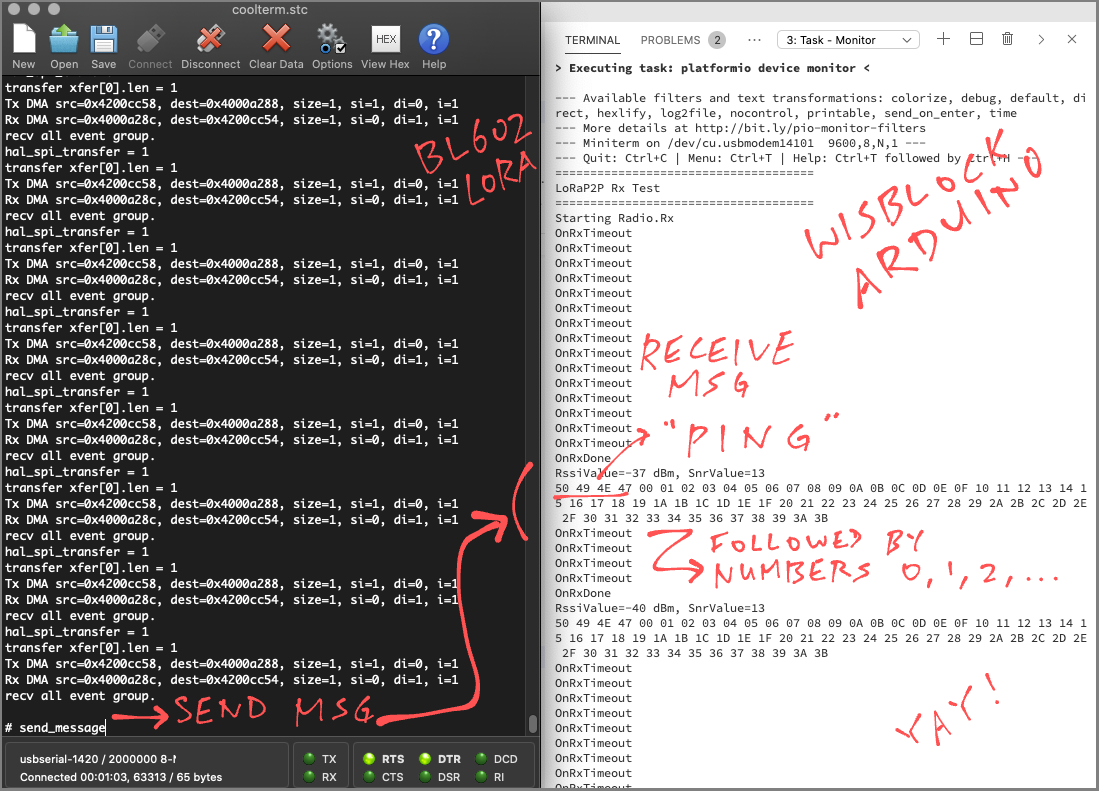 5 Build and Run the LoRa Firmware

Let's run the LoRa Firmware for WisBlock and receive some LoRa Packets!

Now that we understand LoRa Packets and their Signal Strength, let's measure the LoRa Network Coverage! 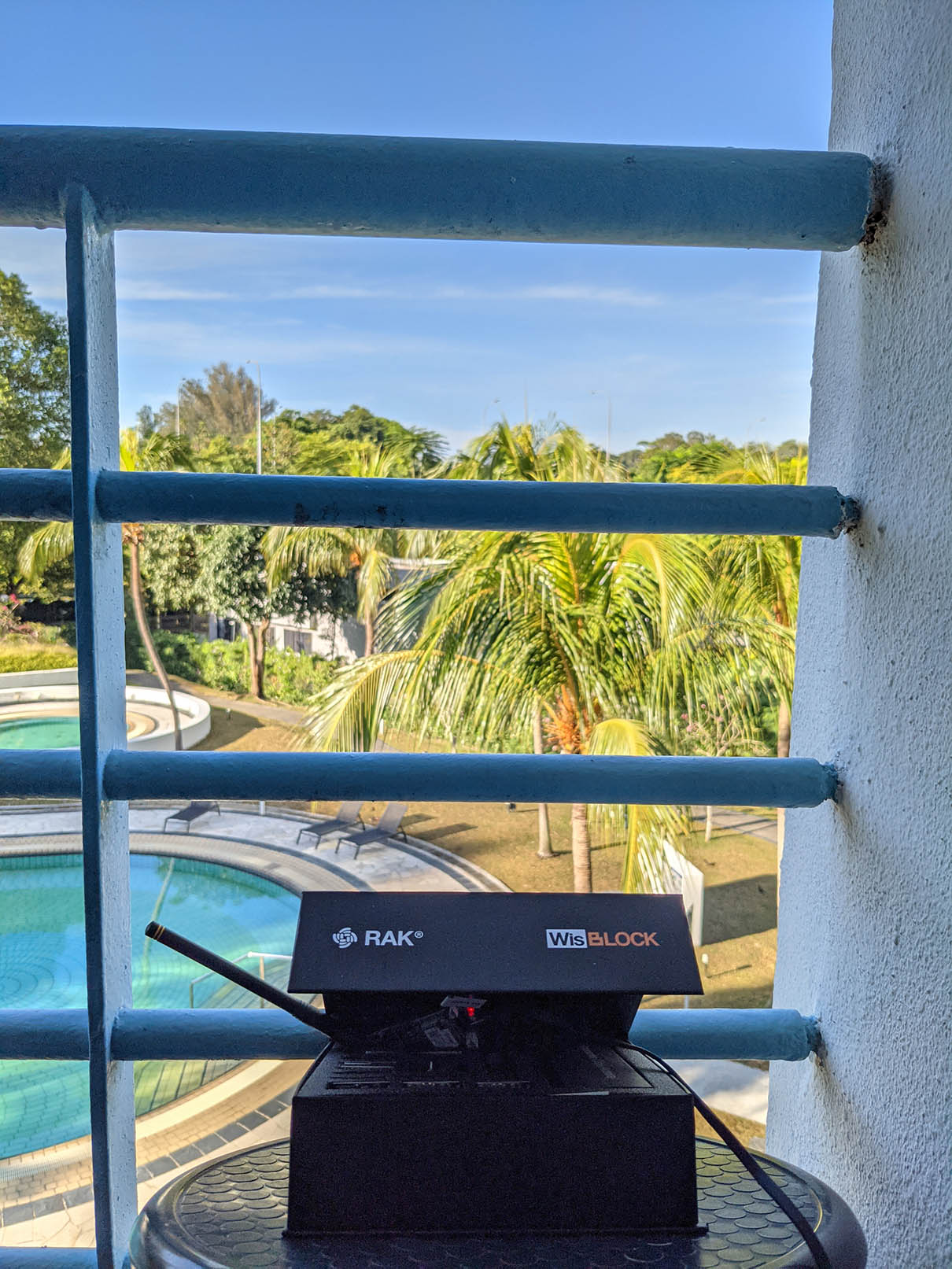 Here comes the #1 Question when deciding where to install our LoRa Sensor and LoRa Receiver...

What's the Maximum Distance between the LoRa Transmitter and LoRa Receiver? 100 metres? 200 metres? Or more?!

LoRa was designed to send packets over great distances with little power. Let's find out how far!

Geocoded, Timestamped Chicken Rice (no relation with the earlier chickens)

What's the Maximum Distance between the LoRa Transmitter and LoRa Receiver? 100 metres? 200 metres? Or more?!

To answer that, we have two helpful things... 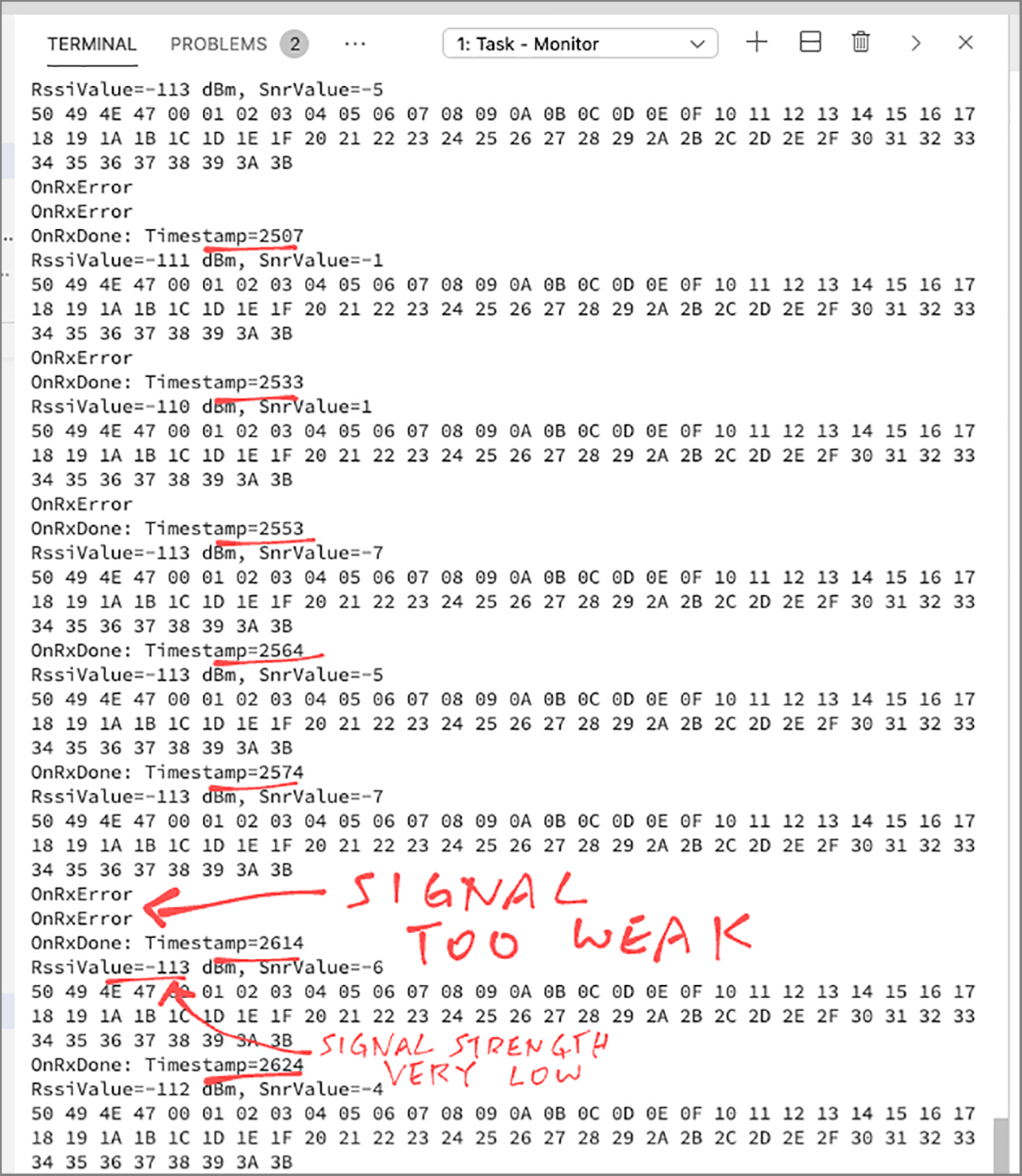 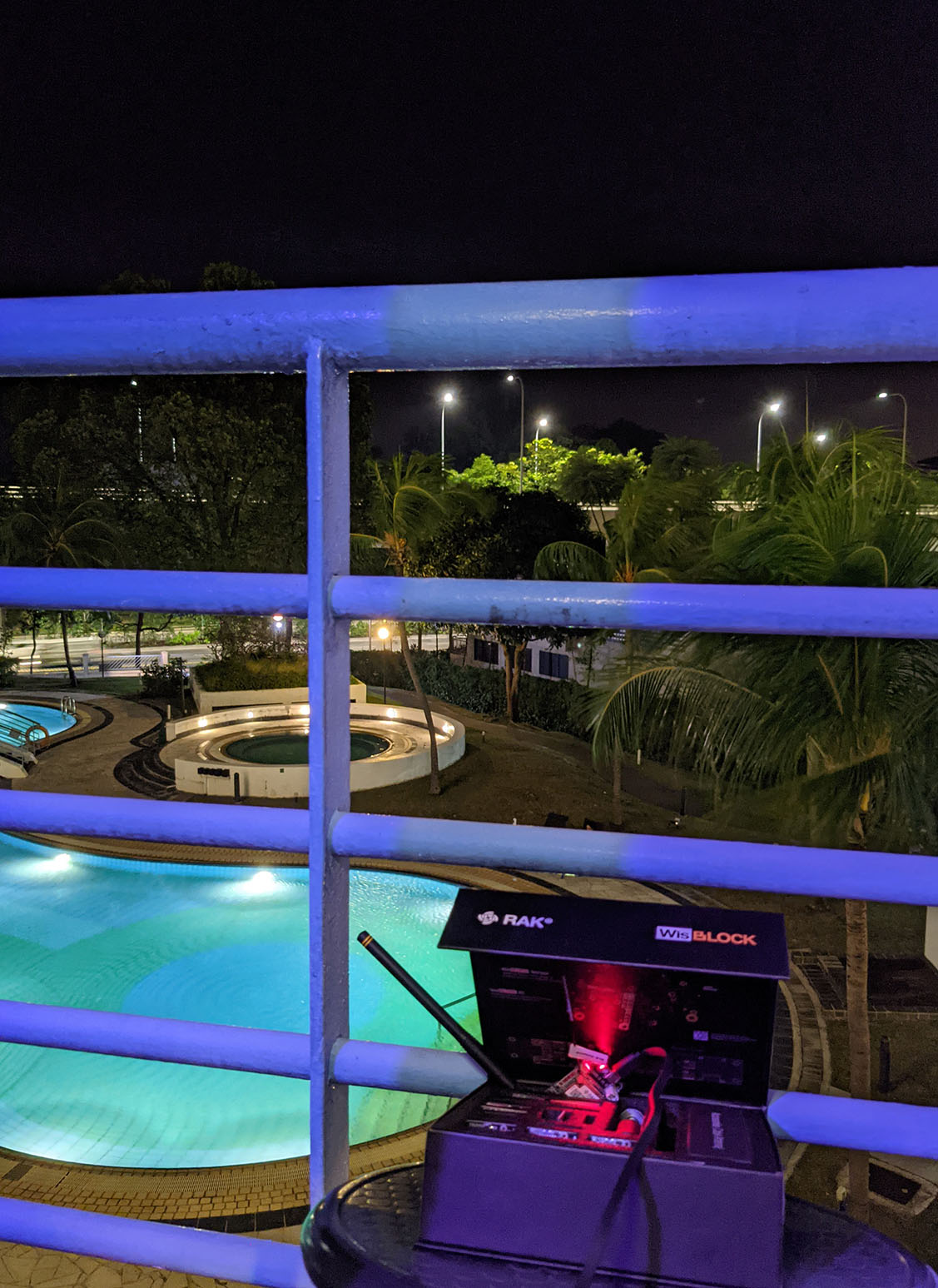 In the next article we shall head back to PineCone BL602 and finish Level 1 of our LoRa Stack...

And then we can progress to LoRa Levels 2 and 3: LoRaWAN and The Things Network.

Read the next article here...

We have come a loooong way since I first experimented with LoRa in 2016...

Got a question, comment or suggestion? Create an Issue or submit a Pull Request here...

In the previous article we've created a LoRa Transmitter with PineCone BL602...

For the LoRa Field Test we installed the BL602 LoRa Ping Firmware: sdk_app_loraping

This is a modified version of sdk_app_lora that does the following...

The changes are made in the function cli_init in demo.c 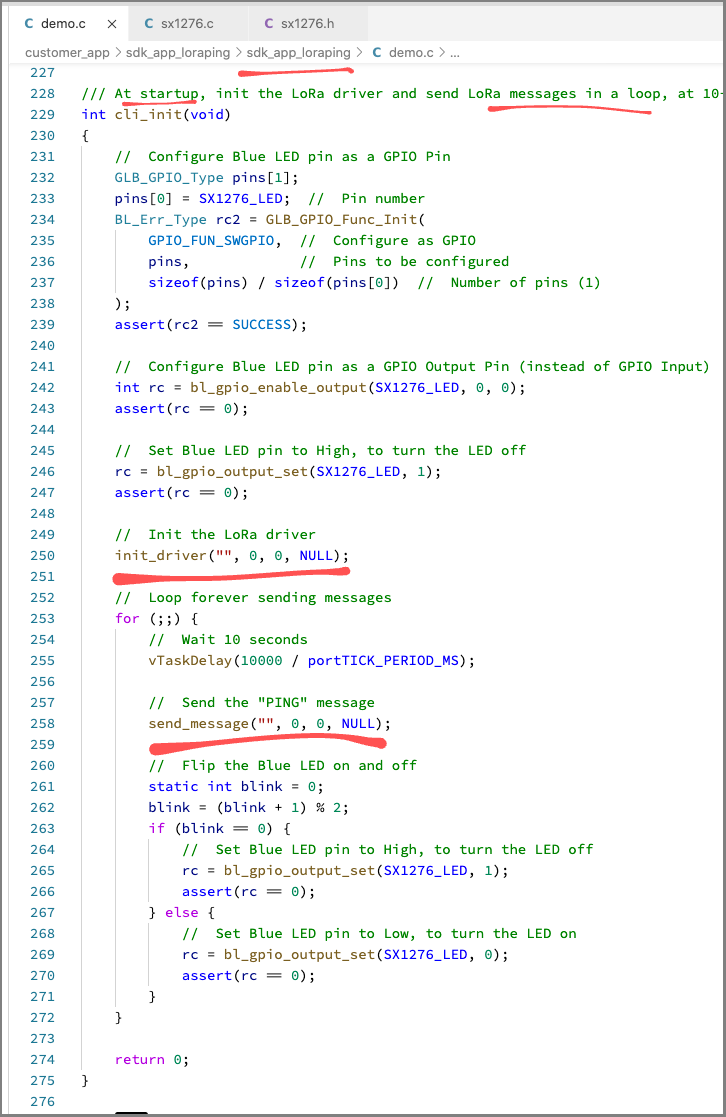 Remember to check that the BL602 LoRa Parameters in LoRa Ping match those in the WisBlock Receiver.

Here's how it looks when BL602 LoRa Ping sends LoRa Packets to WisBlock...

There seems to be an intermittent problem with my LoRa Transmitter (hardware or firmware?)... WisBlock receives the first LoRa Packet transmitted but doesn't receive subsequent packets.

My workaround for now: As I walk, I disconnect and reconnect the USB power to my LoRa Transmitter (every 20 seconds).

When we're out doing the LoRa Field Test, how far shall we walk?

Is there some way to watch the log of packets received by WisBlock... As we walk? 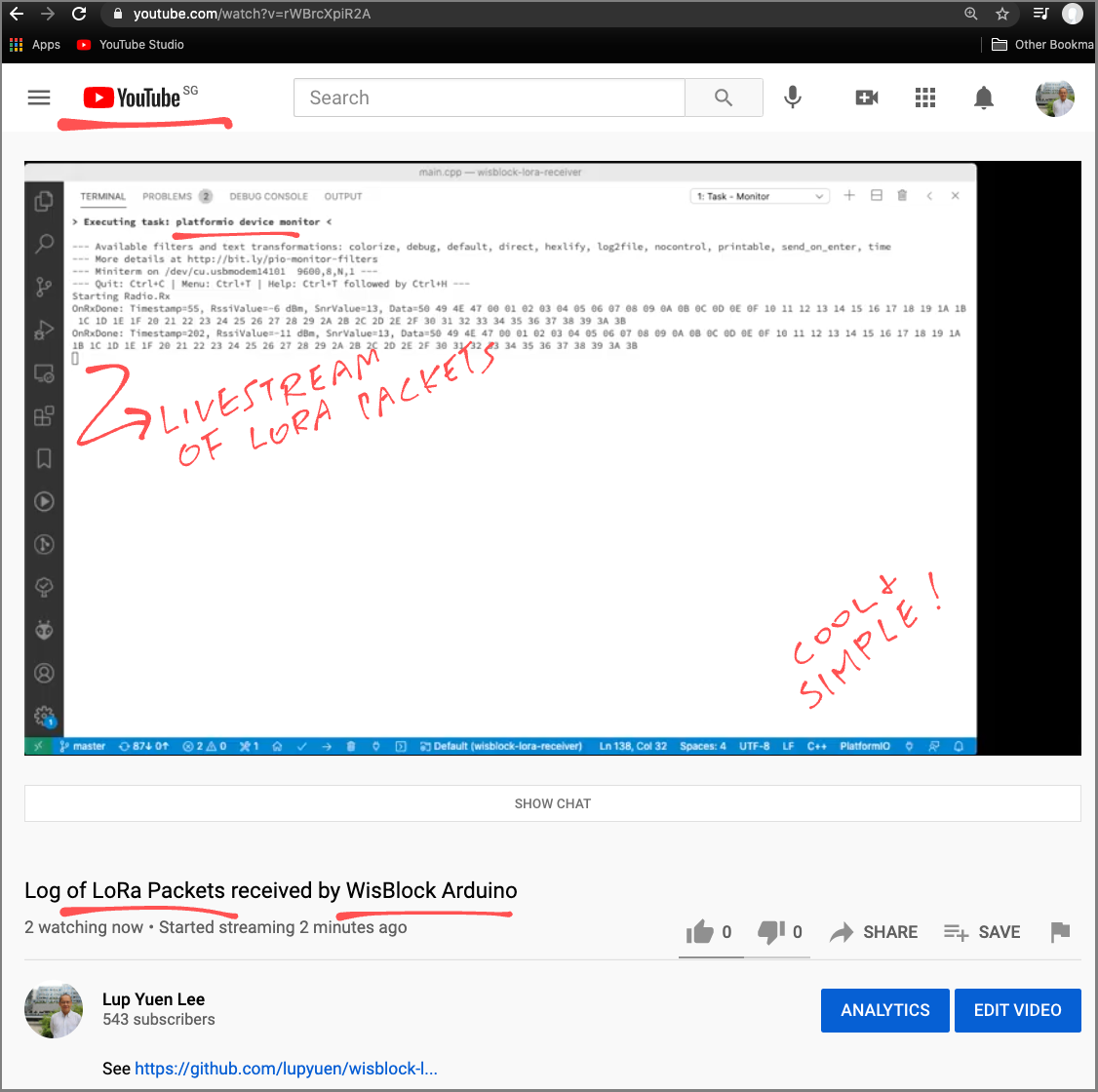 We do this by running OBS Studio on our computer.

OBS Studio streams our desktop to YouTube as a live video stream, so that we may watch the WisBlock Arduino Log on the go. 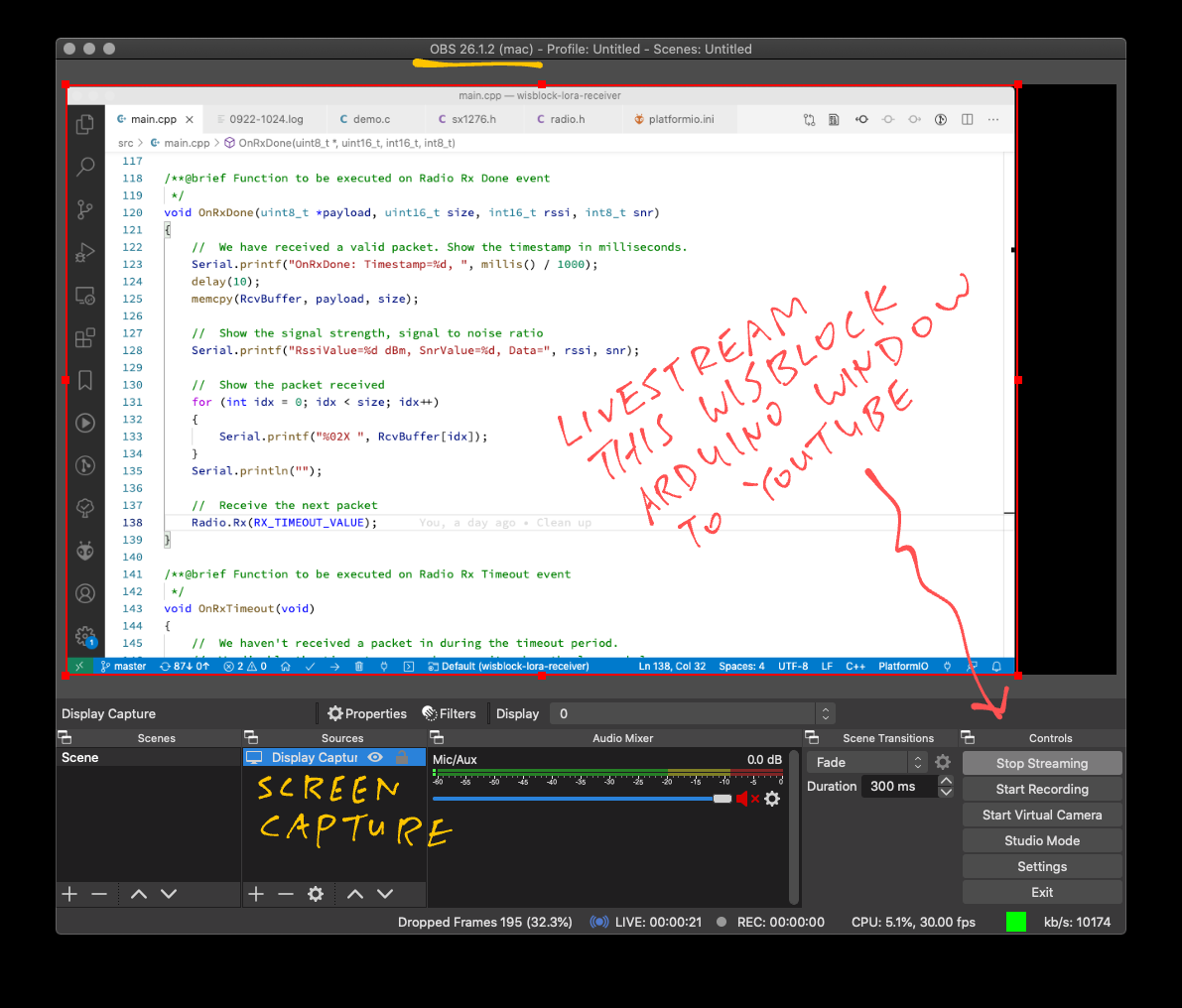