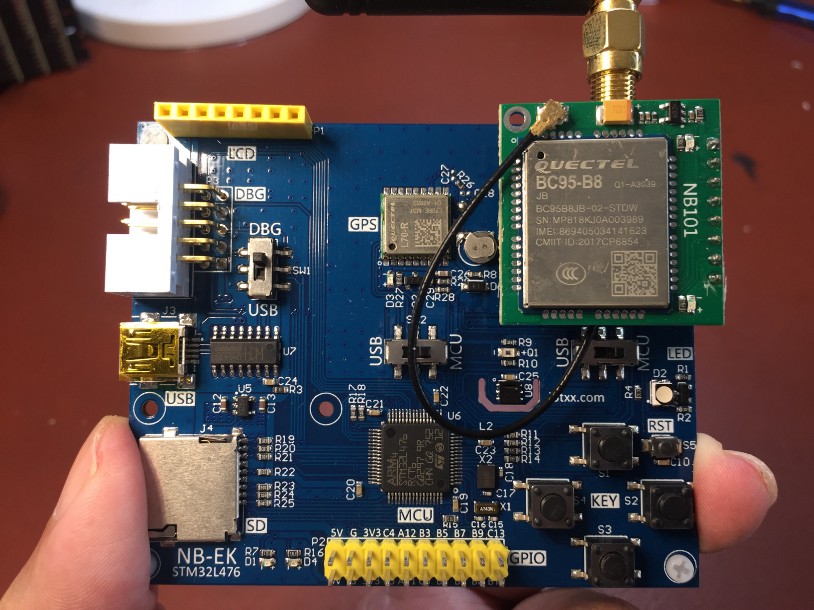 I ordered a few NB-IoT Developer Kits from Taobao.com and realised that their firmware had one thing in common… They were built with Huawei LiteOS.

Although LiteOS is a new embedded OS, we’ll find features that are commonly associated with modern Real-Time Operating Systems like Apache Mynewt and Zephyr.

The kit (shown in the photo above) contains…

1️⃣ Quectel BC95-B8 Band 8 NB-IoT Breakout Board with SIM slot
(Connected to Port LPUART1, PA0 for Enable Pin, PB15 for Interrupt Pin. Note that Port LPUART1 is not the same as USART3, but we may swap the TX/RX pins to make them the same) 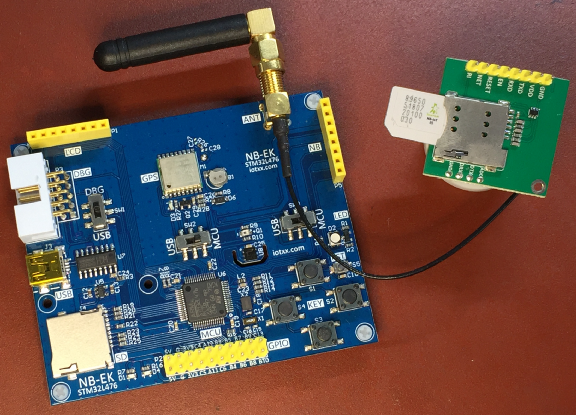 NB-IoT Breakout Board with SIM slot underneath. Note the unusual orientation of the SIM — the notch faces outwards not inwards. Many thanks to StarHub for sponsoring the NB-IoT SIM!

This NB-IoT breakout board (at top right) is for NB-IoT Frequency Band 8 only, so it may not be suitable for all countries. But you may buy and replace the breakout board with the version that supports Global Frequency Bands: Quectel BC95-G Global Band NB-IoT Breakout Board (also on AliExpress, ask for the BC95-G version) 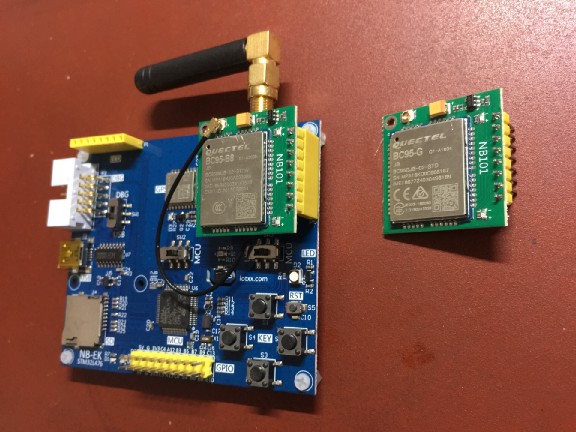 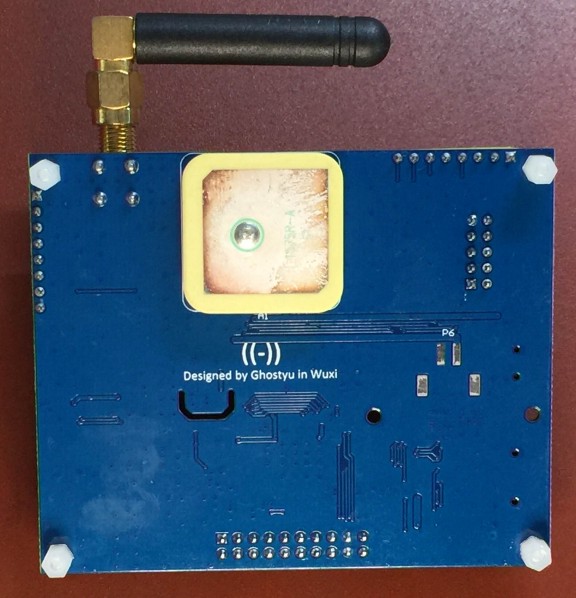 Underside of the board with GPS antenna 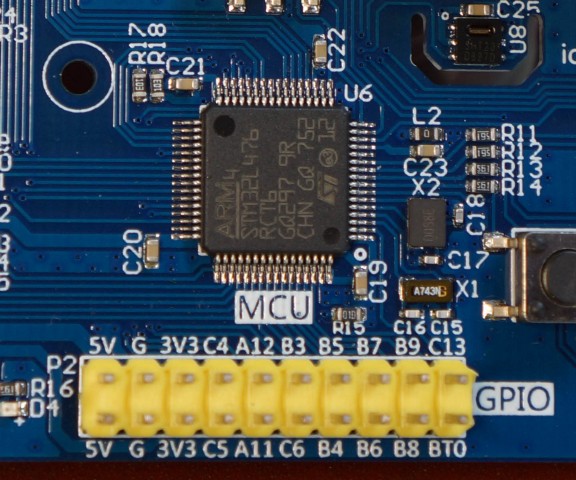 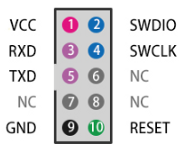 Plus an SWD Debug Port (10-pin, white) at left, compatible with ST-Link v2.

The following pins should be connected: SWDIO, SWCLK, VCC, GND. 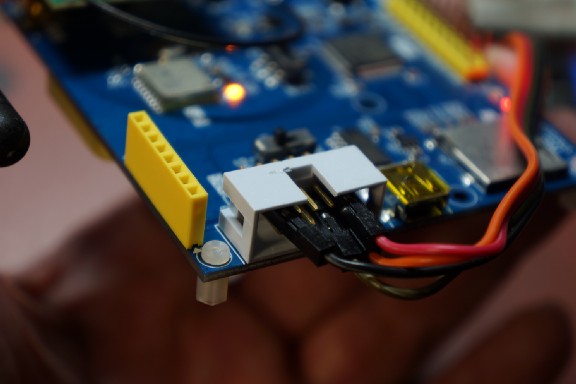 Pins connected from the board to ST-Link: SWDIO, SWCLK, VCC, GND

Here are the schematics (in Chinese)

The source code in this article was downloaded from the official Ghostyu website at doc.iotxx.com/NB-EK-L476 and reuploaded to GitHub… 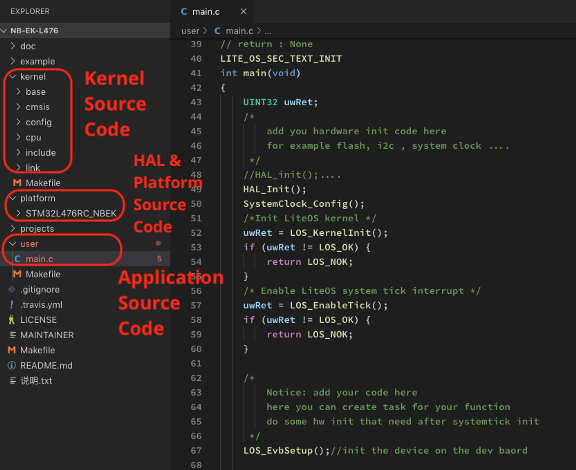 kernel: LiteOS kernel source code. This is provided by Huawei and is common to all LiteOS projects. Arm Cortex-specific code is also located here.

platform: Source code specific to the STM32L476RCT6 microcontroller and the NB-EK-L476 Developer Kit. This folder is packaged by Ghostyu, the makers of the kit.

GCC, Keil and IAR build tools may be used to build LiteOS and the embedded application. 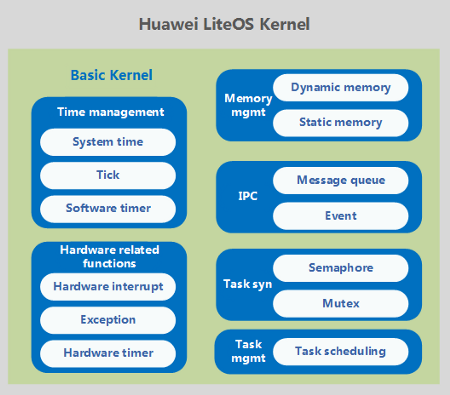 The LiteOS kernel functions are located in the kernel folder. The functions cover…

Below we see the contents of the kernel folder, and a source file from the kernel that deals with task initialisation… 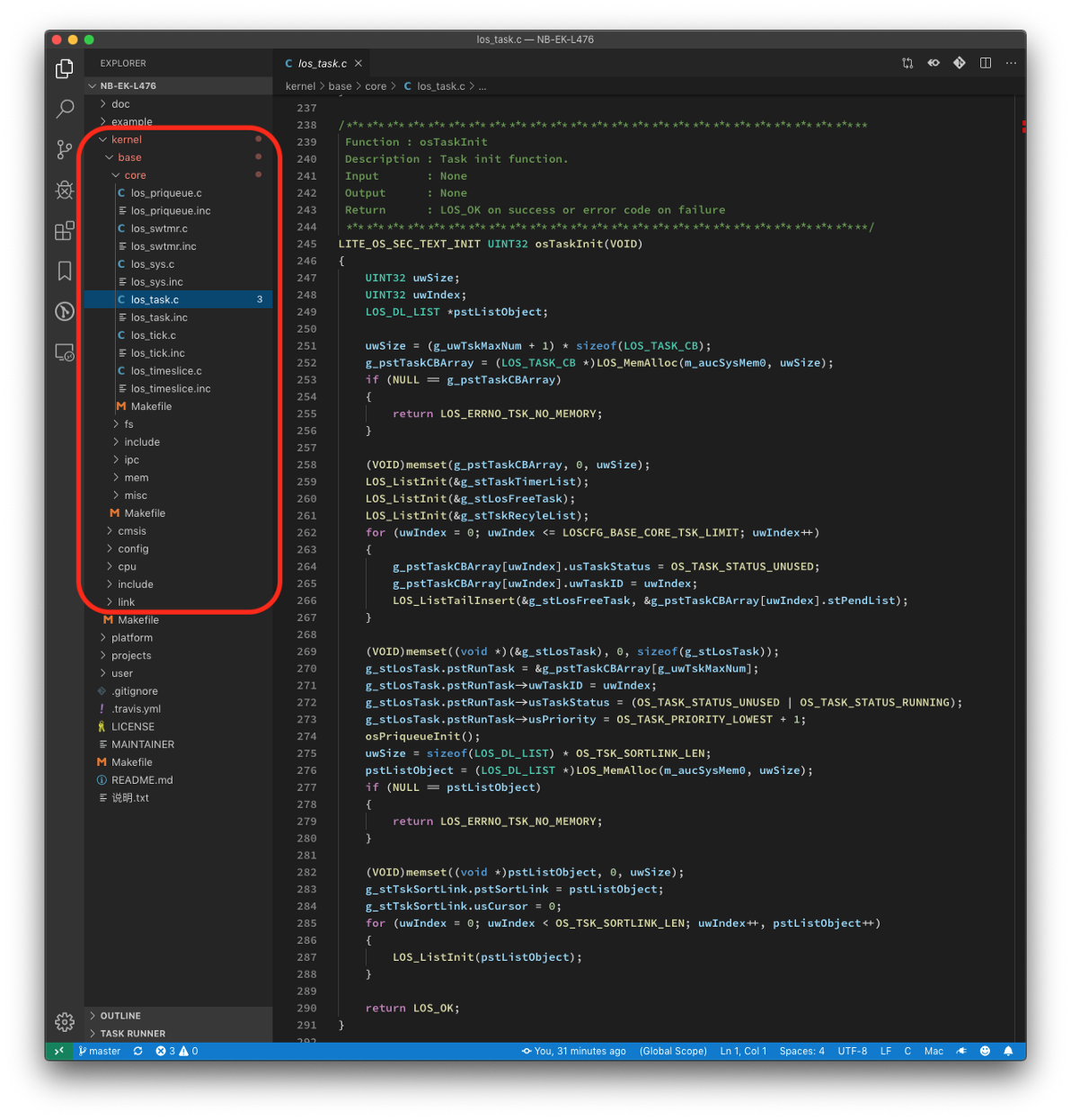 In the same source file, we see the SystemClock_Config() function that powers on the STM32 microcontroller peripherals and initialises the clocks. Read more about STM32 Clocks 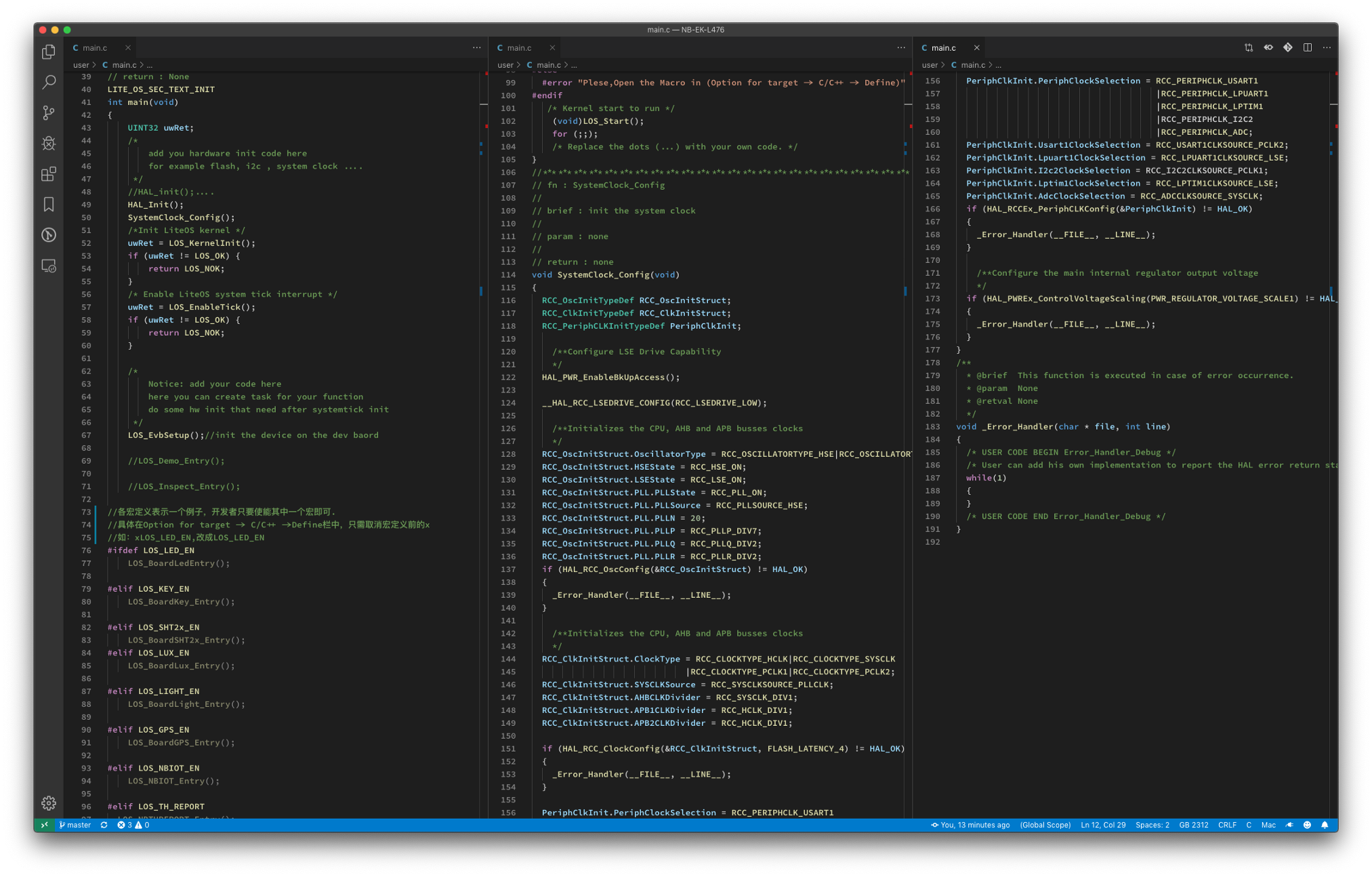 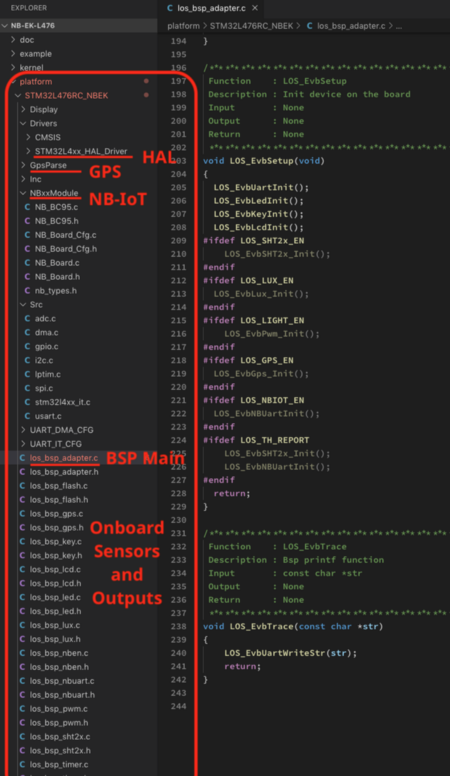 NBxxModule: Driver for onboard Quectel BC95 NB-IoT module

An drivers for various Onboard Sensors and Outputs:

Under platform/STM32L476RC_NBEK/Drivers we find the standard STM32 HAL Functions, provided by STMicroelectronics. These are the low-level Hardware Adaptation Layer functions called by the operating system to perform STM32-specific operations like accessing the UART, I2C and SPI ports.

This is fairly common in embedded operating systems, we see this in Zephyr and Mynewt too. 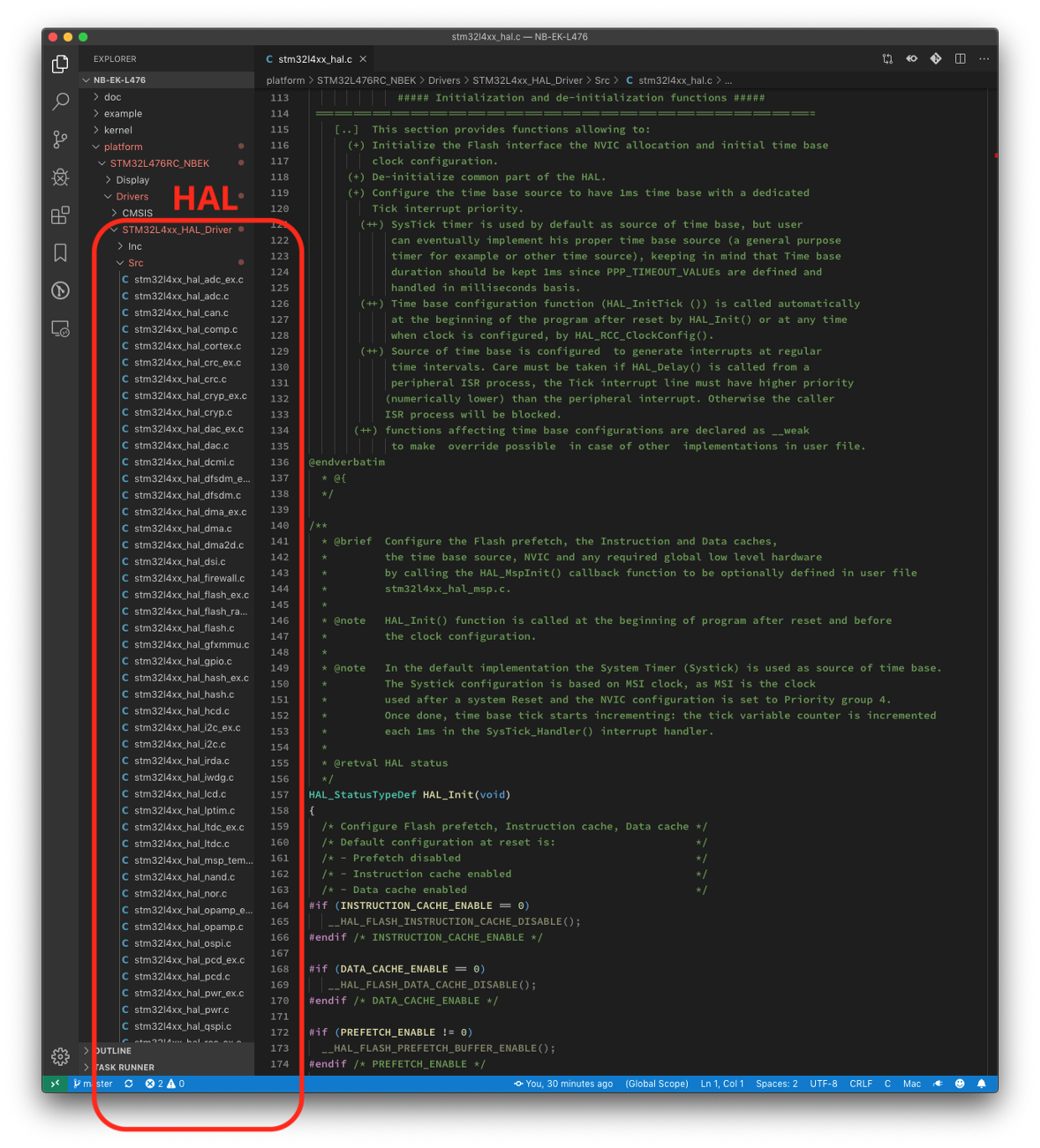 Inside the platform folder is the driver developed by Ghostyu for the Quectel BC95 NB-IoT module, which is connected to Port UART1.

Below we see a State Transition Machine for handling the AT commands: nb95_init_process, nb95_info_process, cmd_next, … 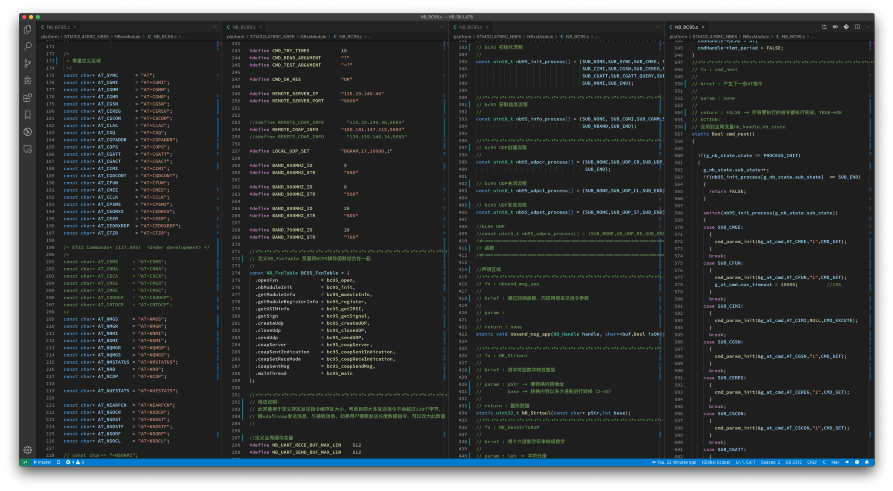 Driver for Quectel BC95 NB-IoT Module. From https://github.com/lupyuen/NB-EK-L476/blob/master/platform/STM32L476RC_NBEK/NBxxModule/NB_BC95.c

Below we see the main loop for handling the AT commands, as well as the message-sending logic… 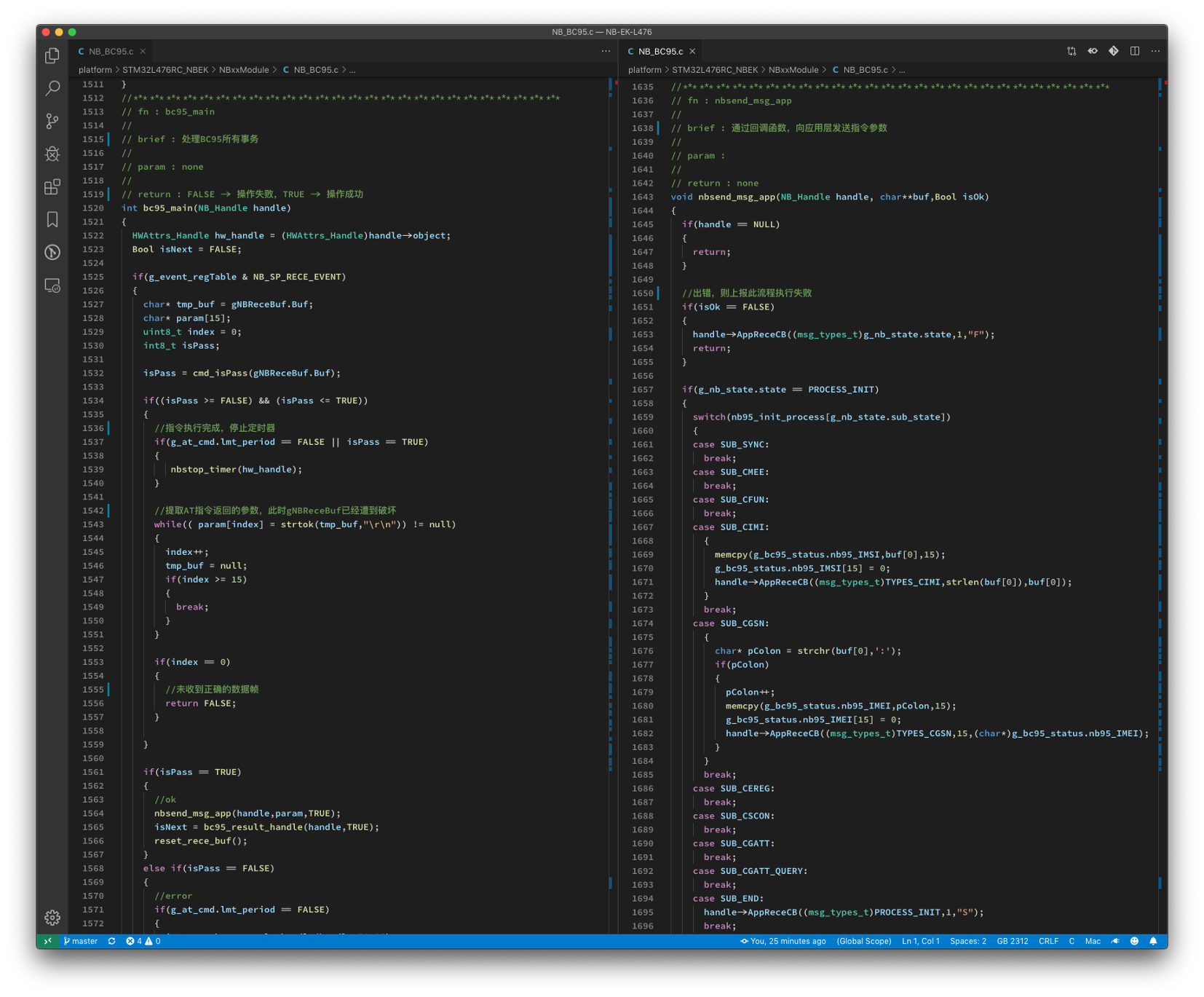 Driver for Quectel BC95 NB-IoT Module. From https://github.com/lupyuen/NB-EK-L476/blob/master/platform/STM32L476RC_NBEK/NBxxModule/NB_BC95.c

Also inside the platform folder, Ghostyu has included a driver for the onboard Quectel L70-R GPS module, which is connected to Port UART2. 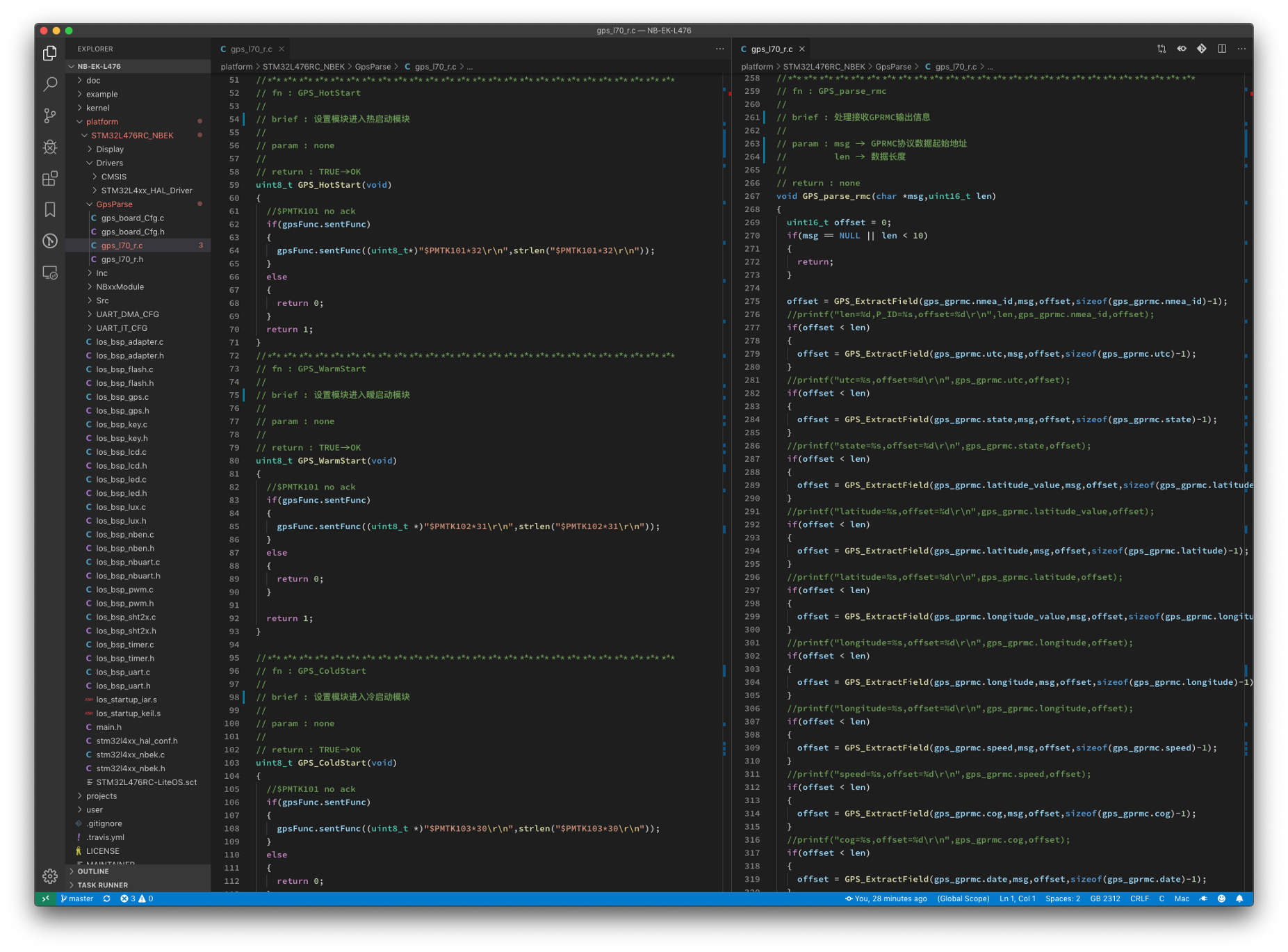 Below is the source code in four embedded operating systems for initialising a task: Huawei LiteOS, Apache Mynewt, FreeRTOS and Zephyr.

We can see that LiteOS and Mynewt are the most similar, since both are lightweight, modern operating systems. 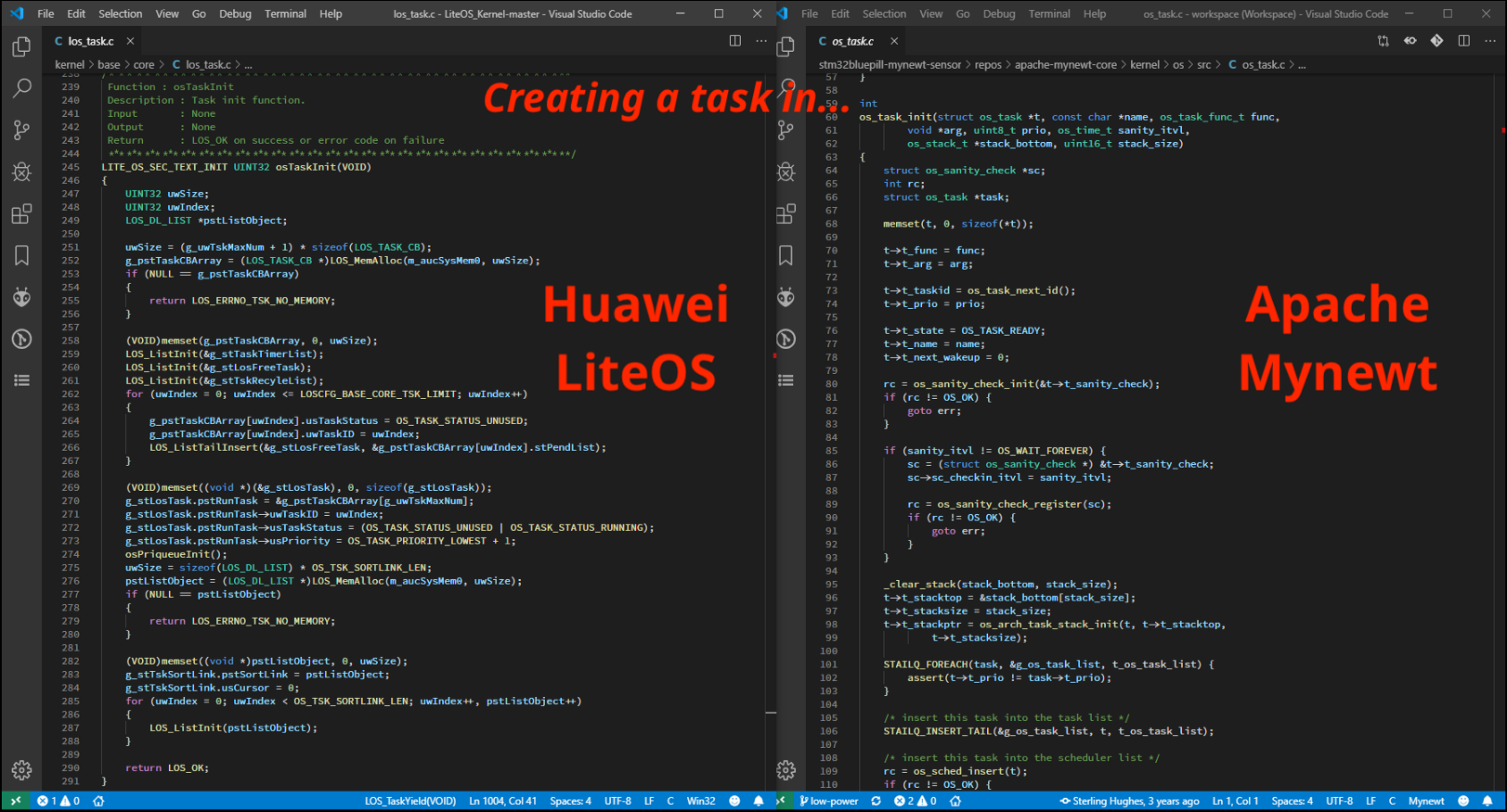 Creating a task in Huawei LiteOS vs Apache Mynewt 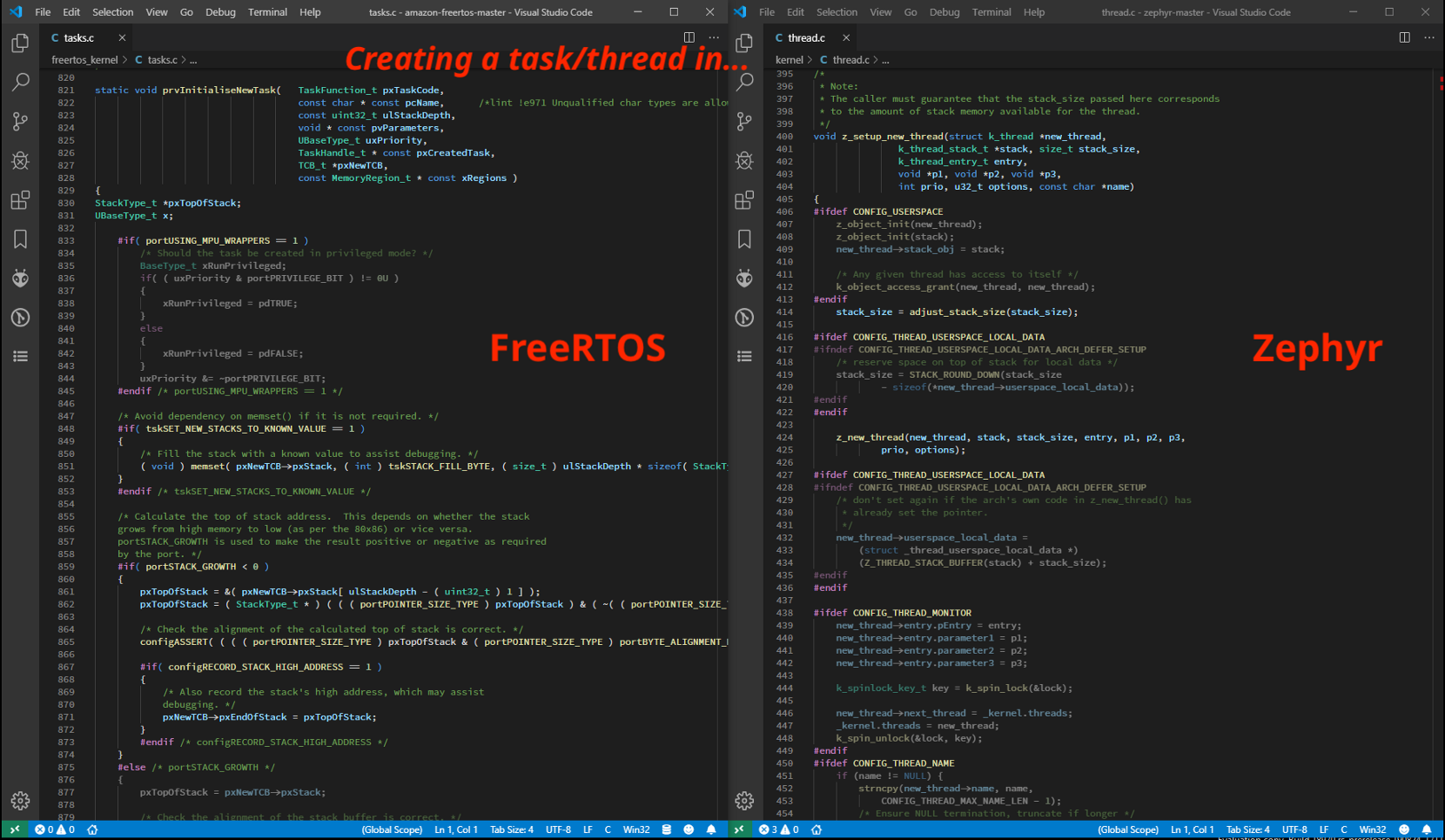 Creating a task in FreeRTOS vs Zephyr

Although I won’t be running LiteOS, I’ll be porting some of the driver code to Apache Mynewt. Soon we’ll have an NB-IoT tutorial based on the Ghostyu NB-EK-L476 Developer Kit… In Embedded Rust!