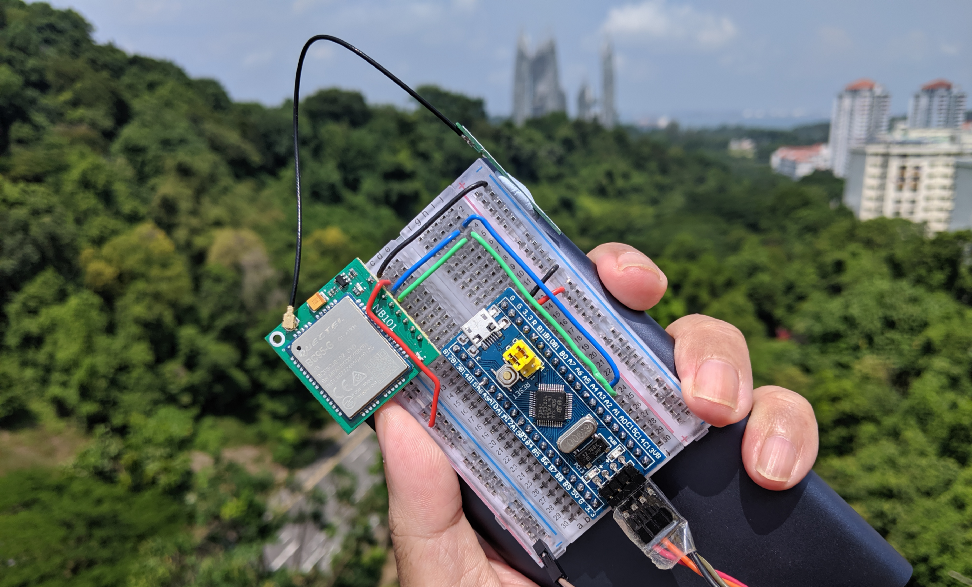 In the previous article we learnt the AT commands for sending sensor data to a CoAP Server via a Quectel NB-IoT module. Now let’s build an IoT sensor with a real microcontroller — STM32 Blue Pill — and a real NB-IoT module — Quectel BC95-G!

Why are we building it with Apache Mynewt realtime operating system?

Because handling the AT commands for the Quectel module is a little complicated… Imagine we’re polling the temperature sensor every 10 seconds and transmitting the sensor data via NB-IoT. But the Quectel module hasn’t responded to our AT command yet. Do we give up and crash the application?

Fortunately Mynewt is fully capable of multitasking — it will wait for the AT command to complete (or cancel it in case of timeout). It has a built-in CoAP library for composing CoAP messages. And drivers for many sensors. So Mynewt is perfect for building NB-IoT devices!

Here’s what we’ll be building today… 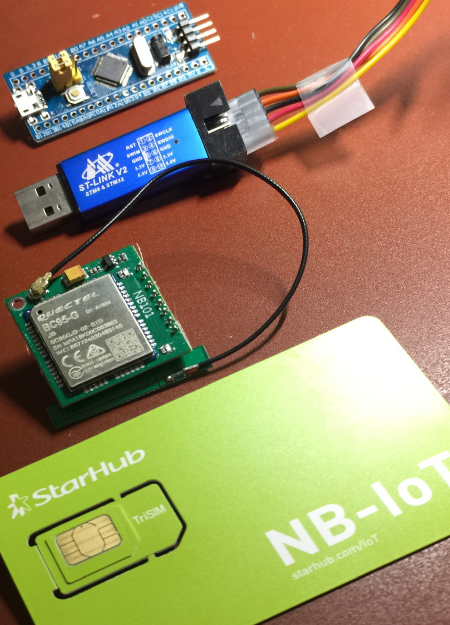 3️⃣ Quectel BC95-G Global NB-IoT Module (breakout board with antenna). I ordered mine here. The manual in Chinese is here.

Many thanks to StarHub for sponsoring the NB-IoT SIM that I used for this tutorial! 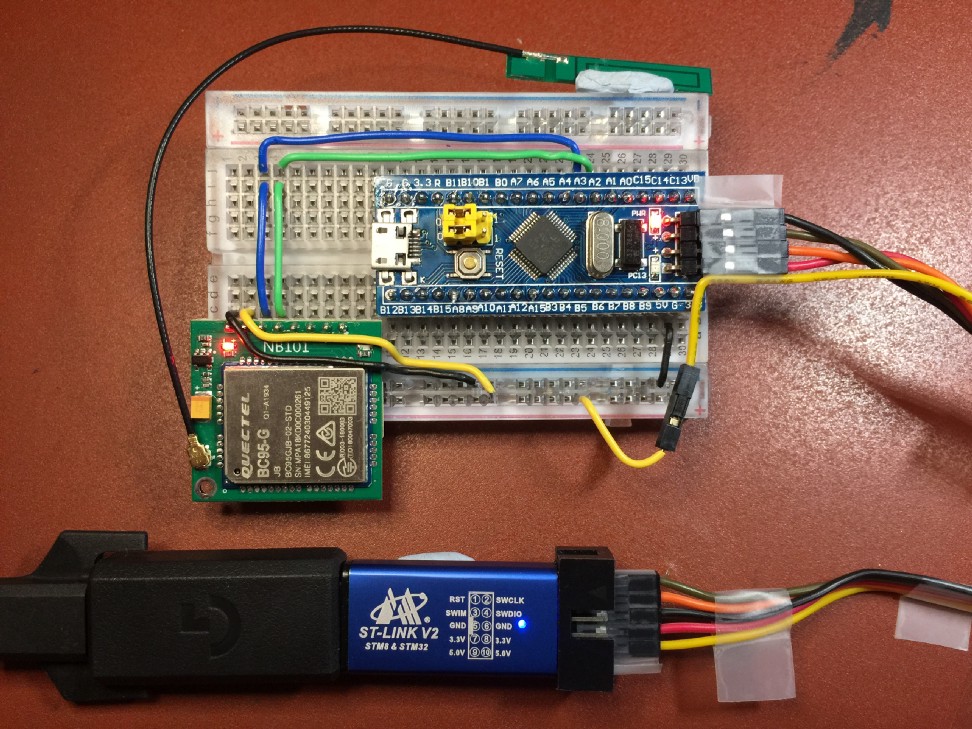 Both yellow jumpers on Blue Pill should be set to the 0 position, as shown in the above photo.

Check the documentation for your Quectel breakout board to confirm that it supports 5V. (Mine does) 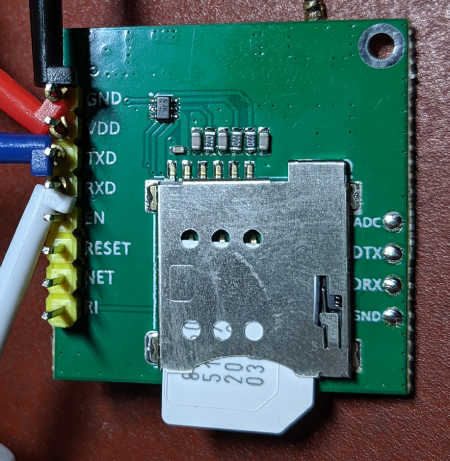 Insert the NB-IoT SIM according to the orientation shown in the photo. (Yes the SIM notch faces outward, not inward)

Remember: Always connect the antenna before powering up the NB-IoT module!

Don’t connect ST-Link to your computer yet, we’ll need to install the ST-Link driver in a while. 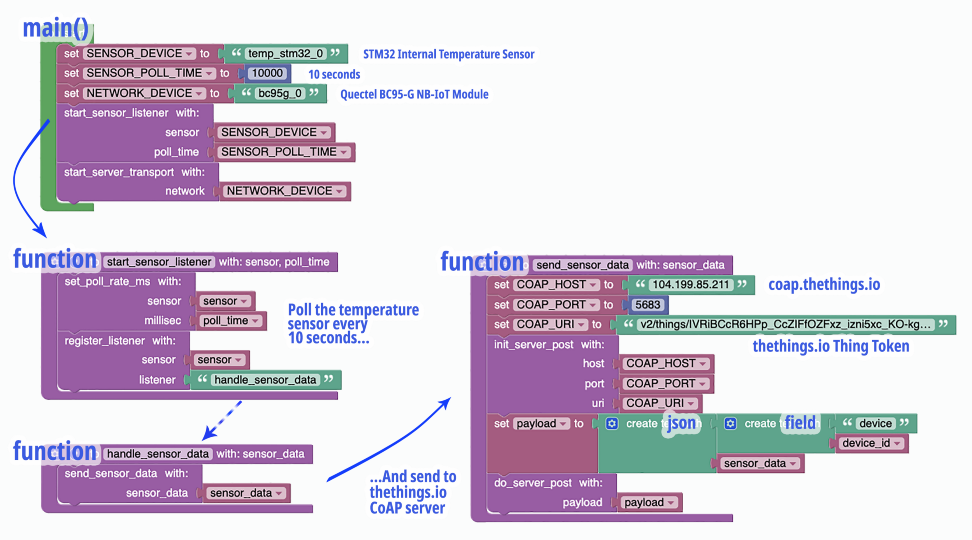 We have just installed a simple program that reads Blue Pill’s internal temperature sensor every 10 seconds and sends the data to a CoAP Server (thethings.io) over the NB-IoT network. 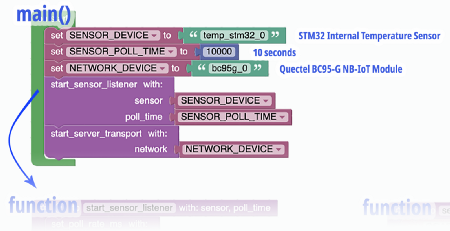 main() in apps/my_sensor_app/src/main.c is the function called upon device startup. Mynewt applications are required to call sysinit() to start the system services and drivers, including the drivers for the internal temperature sensor and the NB-IoT module.

start_sensor_listener() is called next to set up the polling schedule for the temperature sensor. We’ll study this in a while.

The main event loop appears at the end of the main() function. This is required by Mynewt for processing system events. 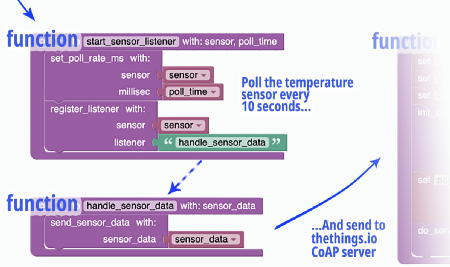 start_sensor_listener() in apps/my_sensor_app/src/sensor.c is called by main() to set the polling schedule for the temperature sensor.

sensor_set_poll_rate_ms() is the Mynewt system function that’s called to set the temperature sensor (temp_stm32_0) to be polled every 10,000 milliseconds (or 10 seconds)

What happens when Mynewt has polled the sensor data?

In the call to sensor_register_listener() (another Mynewt system function), we instruct Mynewt to call our function handle_sensor_data() whenever it has polled for new sensor data.

Why do we transmit the raw sensor data as an integer value (like 1715) instead of a floating-point value (like 32.1 degrees Celsius)?

Remember that we are creating an embedded application for a constrained, low-power microcontroller with little ROM and RAM. On constrained devices, it takes a lot of ROM and RAM to convert temperature values from integer to floating-point.

Hence we conserve device resources when we transmit sensor values in their raw, integer forms and let the IoT cloud (thethings.io) convert the values into floating-point.

send_sensor_data() in apps/my_sensor_app/src/network.c is called by handle_sensor_data() to transmit sensor data. In this program we’re transmitting sensor data to the CoAP server at thethings.io.

thethings.io requires our sensor data to be in this JSON format…

By calling the macros CP_ROOT, CP_ARRAY, CP_ITEM_STR and CP_ITEM_INT_VAL, the program composes a JSON message in the above format based on our raw temperature value t.

When do_server_post() is called, the JSON message is encoded as the payload of a CoAP message. The CoAP message is transmitted as a UDP packet to thethings.io over the NB-IoT network.

What’s device in the JSON message? We’ll find out in a while. 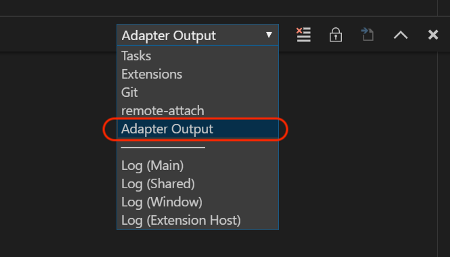 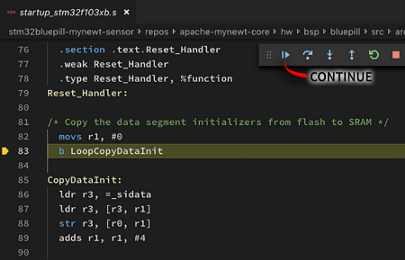 3️⃣ The debugger pauses at the line with LoopCopyDataInit 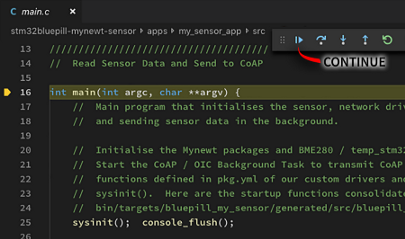 4️⃣ The debugger pauses next at the main() function.

The program should now poll the internal temperature sensor every 10 seconds and transmit to thethings.io. Let’s study the Blue Pill execution log…

Since AT+ is present in all AT commands, we won’t show the prefix AT+ in the log. All the AT commands below are explained in my previous article.

When the program starts, it disables NB-IoT module’s auto-connection (NCONFIG=AUTOCONNECT,FALSE) and reboots the NB-IoT module (NRB).

The program queries the NB-IoT registration status (CEREG?). The response +CEREG:0,2 means that the NB-IoT module is still registering with the NB-IoT network.

The program continues to query the registration status (CEREG?). In a few seconds, we get the response +CEREG:0,1 which means that the NB-IoT module has registered with the NB-IoT network.

Before transmitting, we ask the NB-IoT module to allocate a local UDP port (NSOCR=DGRAM,17,0,1). The module returns local port 1.

Next the program reads the Blue Pill’s internal temperature sensor (every 10 seconds) and obtains the raw temperature value 1757.

…And transmits the CoAP message via the AT command NSOST=… (not shown in the log).

The hex numbers 58 02 00 01 ... are the bytes of the encoded CoAP message. You may decode the CoAP message with Wireshark as explained in the previous article.

The CoAP message is transmitted by the NB-IoT module to the CoAP server at thethings.io. Notice that the message includes a device ID ac913c... This is a random number that’s transmitted in every CoAP message. 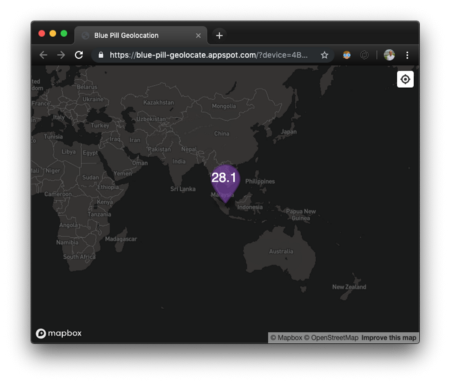 The URL (and the random number) changes each time we restart the program. More details about the setup for thethings.io may be found in the previous article.

In the next article we’ll create more NB-IoT devices… this time with Visual Rust! 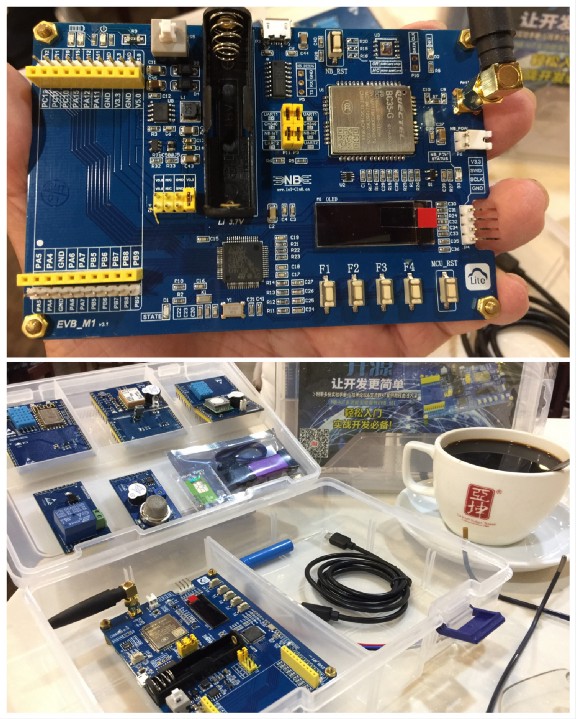 The following Quectel documents were very useful for understanding the AT commands. Download them from (free registration required) https://www.quectel.com/support/downloadb/TechnicalDocuments.htm

driver.cpp contains the main logic for the driver. It sends AT commands and handles responses and timeouts.

ATParser and BufferedSerial libraries (ported from mbed) are called by driver.cpp to parse the AT responses from the Quectel module. The dynamic heap memory allocation in the original mbed version has been replaced by static memory buffers, to reduce RAM and ROM size.

pkg.yml instructs Mynewt to call bc95g_create() to initialise the driver during startup

Why do we use mbufs when transmitting sensor data? Like in bc95g_socket_tx_mbuf()?

An mbuf (“memory buffer”) is a chain of memory blocks that’s optimised for transmitting network messages. Recall the structure of our CoAP message from the previous article… Every CoAP message has a Preamble and an Options Header that are usually fixed in length for the session. But the Payload of the message may vary, depending on the sensor data.

Shall we keep reallocating and deallocating the memory blocks for the Preamble, Options and Payload every time we transmit a CoAP message?

No, we may actually reuse the same mbuf to hold the fixed-length Preamble and Options. But depending on the sensor data, we’ll attach one or more mbufs to the chain to hold the entire Payload. This speeds up the composition of CoAP messages.

That’s why in the driver code we see the program walking through each mbuf in the chain and transmitting each mbuf. This keeps the networking code highly efficient, just like early versions of the Unix operating system.