Pretend you’re my IoT student. I give you a PineTime Smart Watch and challenge you to “Make it work… Especially the touch screen!” The Touch Screen appears to be lacking some documentation. What would you do?

We carefully pry open the PineTime Smart Watch with tweezers (or forceps) and examine the Touch Screen. It looks like a single chunk of plastic… But it’s actually two delicate pieces fused together: Touch Panel and Display Panel… 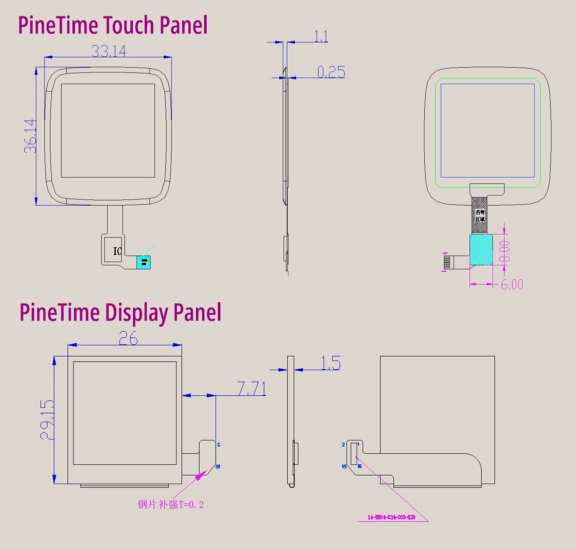 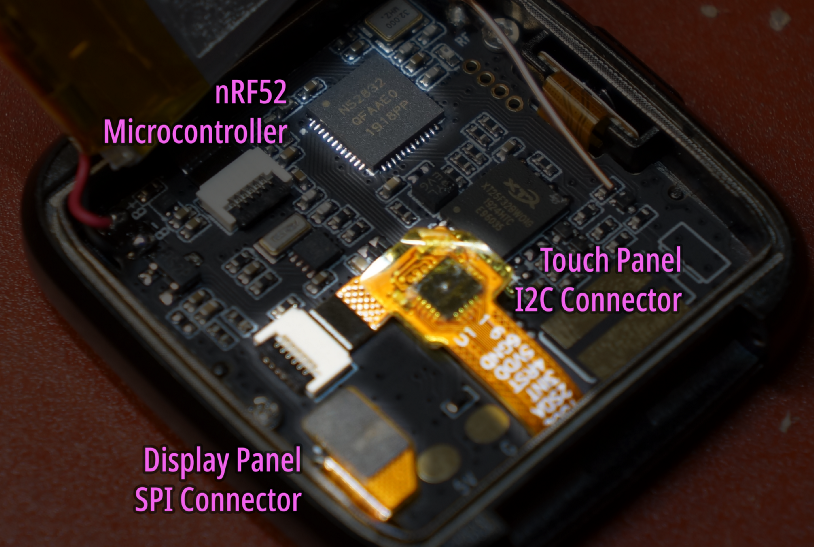 Last week we have programmed the ST7789 Display Controller (via SPI) to render colour text and graphics on the Display Panel. This week we’ll look at the Hynitron CST816S Capacitive Touch Controller for PineTime’s Touch Panel…

The PineTime Touch Controller is connected to the nRF52 Microcontroller via an I2C Bus. That stands for Inter-Integrated Circuit and is pronounced “I-squared-C”. (I used to call it “I-two-C” until my IoT students corrected me)

Thankfully there are no Ghost Stations in I2C… When the Microcontroller sends a packet to a Slave Device at a particular address, the Slave Device must respond with another packet. This called I2C Probing and the Rust code on PineTime looks like this…

Probing the I2C Bus on PineTime to discover I2C devices. From https://github.com/lupyuen/stm32bluepill-mynewt-sensor/blob/pinetime/rust/app/src/touch_sensor.rs

There are only 128 possible I2C Addresses (0 to 127) so it’s feasible to identify all I2C Slave Devices by probing each address. (Here’s a list of I2C Addresses for popular devices)

Running the above code on PineTime we find two devices on our I2C Bus, at I2C Addresses 0x18 and 0x44. That’s the Accelerometer and Heart Rate Sensor. (I verified against the docs)

But where’s the Touch Controller? Do Ghost Stations really exist on I2C?

What is this “Special Event" that brings our Touch Controller to life?

Maybe it’s low on power? This power problem happens often with wireless gadgets like NB-IoT. We connect the 5 Volt power from the ST-Link USB dongle and… Nothing changes! (Though the PineTime Battery gets properly charged now… Nice!) 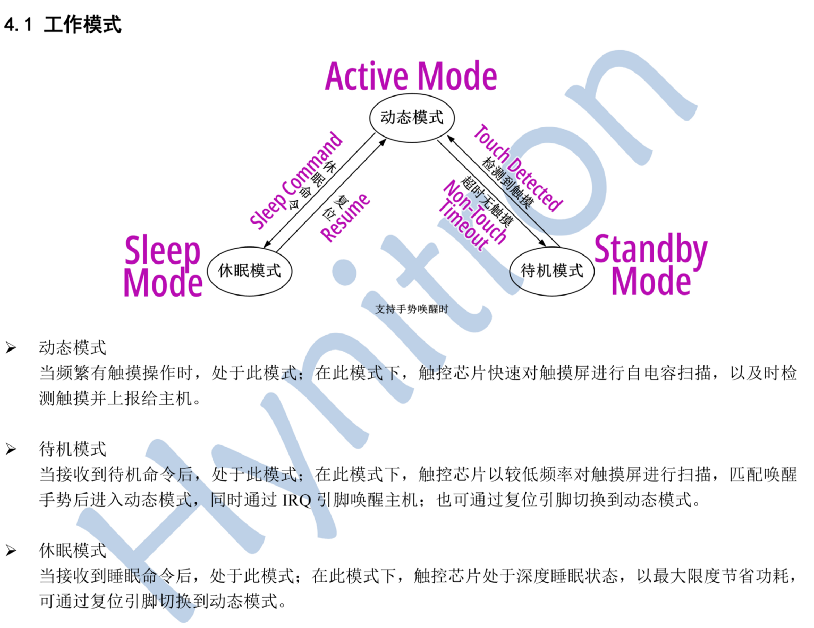 We stare hard at this State Transition Diagram from the Touch Controller doc. (The English Translation looked alien so we’re using the original Chinese version with my translation) What is it trying to tell us?

It says that the Touch Controller can be woken from the Standby Mode… By Touch!

We tap the screen… Sure enough our Ghost Station comes to life! Our Touch Controller needs a little tap (the “Special Event”) to wake it up and respond to I2C packets. Mystery solved!

To discover which parts of the screen are touched (up to 10 points), we need to read 63 bytes from the PineTime Touch Controller… That’s 63 consecutive I2C Registers, 1 byte per register!

There’s an efficient way to read 63 consecutive I2C Registers from the PineTime Touch Controller. Some people call it Bulk Reading but let’s call it I2C Streaming. 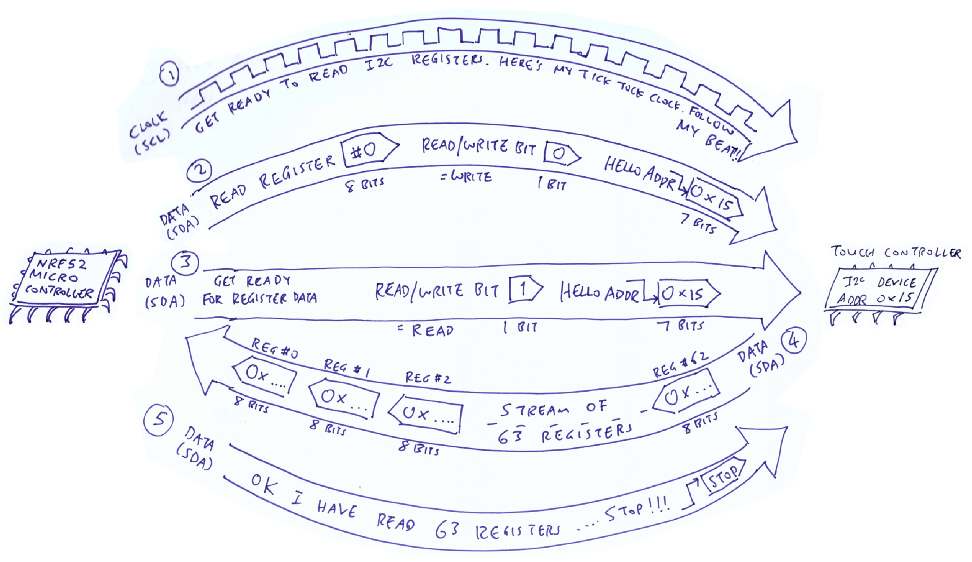 Steps 1 through 5 are explained in the Rust code below that reads a range of I2C Registers (Registers #0 to #62, total 63 Registers) from the Touch Controller (at I2C Address 0x15)

Rust code to read a range of I2C Registers from an I2C Device on PineTime. The steps in the comments refer to the steps in the diagram above. From https://github.com/lupyuen/stm32bluepill-mynewt-sensor/blob/pinetime/rust/app/src/touch_sensor.rs

Yep the code looks alarming with the unsafe blocks (because we are calling C APIs from Rust). Eventually we should implement the I2C Interface for Rust Embedded HAL… And the unsafe blocks will be gone forever.

2️⃣ Action: Whether the point was just touched, just untouched or kept in contact

3️⃣ Finger: A number that identifies the finger that touched the point

4️⃣ Pressure: How hard the point was touched

63 bytes of raw touch data converted to 10 points of touch information. This is the Rust representation of the 10 touch points. From https://github.com/lupyuen/stm32bluepill-mynewt-sensor/blob/pinetime/rust/app/src/touch_sensor.rs

That’s a lot of information for each point touched… Why do we need so much information? Why the finger-pointing?

Think of the classic 2010 iPad game Fruit Ninja… The game tracks the swiping motion of each finger to figure out which fruits (and bombs) you’re slashing. So the tracking of each finger is important for swiping-based apps. (Like Tinder)

The Touch Controller doesn’t really know whether you touched the screen with your left forefinger or your right thumb (or your nose)… It just assigns a number to the finger (or appendage) that’s swiping the screen. The Touch Action (touched / untouched / in contact) is necessary to determine whether this is the start, middle or end of a swipe.

Based on the reference code, we derived the following Rust function for reading and converting the 63 bytes of raw touch data into touch points. Note that only the first 5 touch points out of 10 are converted. (Probably because it’s not meaningful to track 10 fingers on a tiny watch screen)

Now that we have the converted touch data, let’s display the data on the screen to verify that we have converted the data correctly. Here’s the Rust code that takes coordinates (X, Y) and displays them as X = …, Y = … on the PineTime screen…

Rust code to display the touched coordinates on the screen. From https://github.com/lupyuen/stm32bluepill-mynewt-sensor/blob/pinetime/rust/app/src/display.rs

Why no Heap in our application? For Embedded Applications it’s a good practice to budget our memory requirements in advance and allocate our variables statically. Yes that means we have to do more planning while designing our programs… But we prevent problems like running out of heap memory (and heap fragmentation).

In the above code we have budgeted 20 bytes in our fixed-size arrayvec::ArrayString buffer for storing each formatted text string. 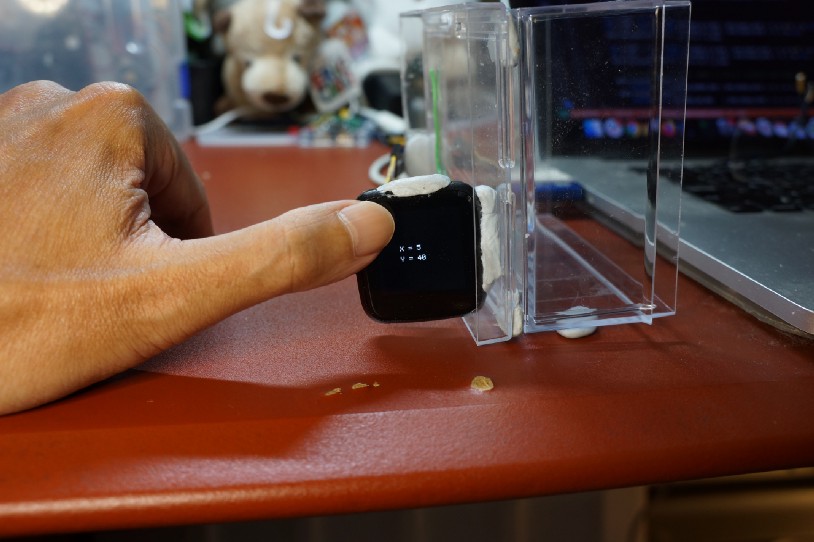 Remember the Ghost Station? We can’t read the I2C Registers on the Touch Controller unless the screen has been tapped… So how will we know when to read the registers? 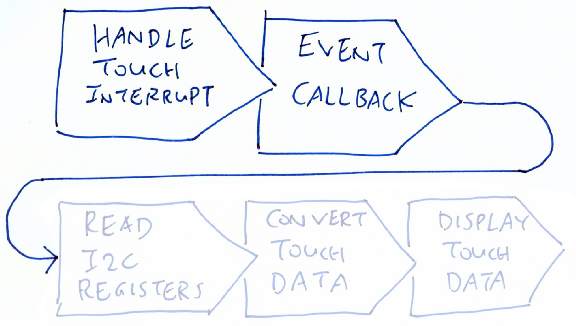 Assigning an Interrupt Handler for Touch Interrupt. From https://github.com/lupyuen/stm32bluepill-mynewt-sensor/blob/pinetime/rust/app/src/touch_sensor.rs

touch_interrupt_handler() is an Interrupt Handler Function. Note that this Rust function is declared extern “C” because it will be called by Mynewt OS whenever the Touch Interrupt occurs. So it appears to Mynewt OS like a regular C function.

That’s because Interrupt Handlers are not meant for doing any kind of data processing! Mynewt OS has gone out of its usual routine, just to call our Interrupt Handler because somebody touched the screen. Mynewt OS could have been doing something very important when the interrupt occurred!

Would be so rude of us to snatch Mynewt OS away from some important task… Just to swipe some fruits / bombs / dating profiles!

So let’s be polite to Mynewt OS and take up as little time as possible. We’ll defer the swiping of the fruit / bomb / dating profile… By adding a Mynewt Event to Mynewt’s Event Queue.

Here’s the Rust code that will eventually be triggered via the Mynewt Event, after Mynewt OS has completed the important tasks. We read the touch data (via I2C Streaming) and display the first detected touch point.

The complete flow from Touch Interrupt to Touch Data Display looks like this. The Rust Driver for PineTime Touch Controller is incomplete because we haven’t implemented Hit Testing to detect the graphic or text on the screen that’s tapped… So Hit Testing is coming next! (And if you wish to help out, drop me a note!)

Here are the other articles in the PineTime series…

Last week I declared that PineTime is perfect for teaching IoT… Today I’m walking the talk by applying PineTime to explain how a modern touchscreen works!

I built the Rust driver iteratively (pretty much in the same sequence we see in this article)… I really love the way Rust and Mynewt OS on PineTime make Embedded Experiments so fun and easy to execute!

As we have seen today, building the right IoT Software to run on today’s IoT Hardware can be challenging because of language issues. If you can read Chinese like me… Hang on to this precious skill! (Try watching 延禧攻略 or the Mandarin news)

I bet at this very moment, a non-native English reader is trying to read this English article… Struggling to understand “Ghost Station”, “dating profile”, “fish tank water” and their relevance to Touch Controllers.

IoT Education across all languages is needed now, more than ever. Here’s what I’m doing about it…

I hereby waive all copyright on my articles. You may reproduce my articles in any language, without asking for my permission.

Although a few of my articles have been translated into Chinese and Japanese… We can do better. Let’s share our IoT skills worldwide! 😀

The updated code may be found in the pinetime branch of this repository, which is the same branch used in the previous article…