(UNFINISHED) Draw your own PineTime Watch Face... From WebAssembly to Embedded Rust 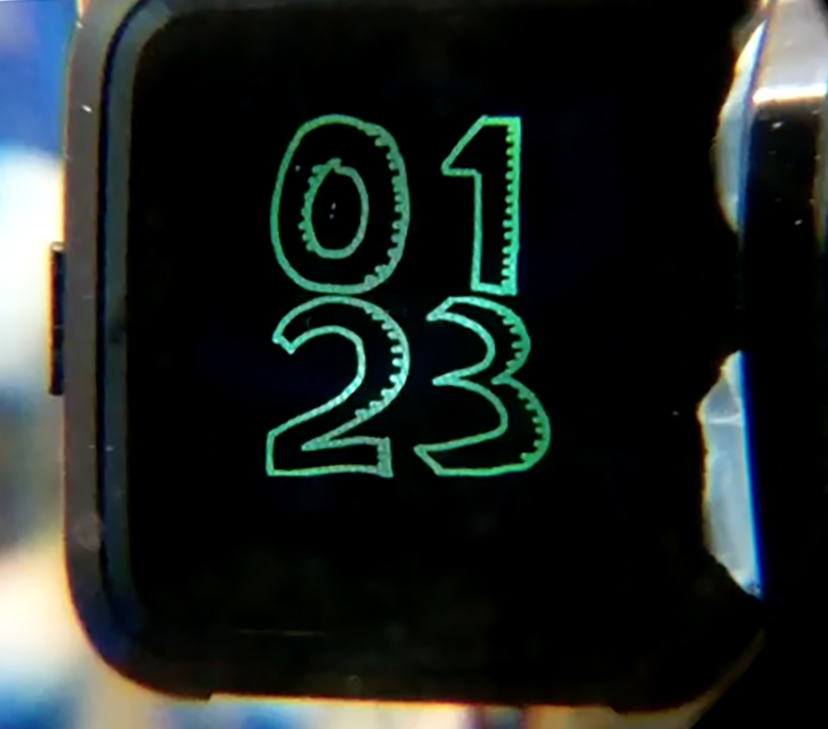 NOTE: THIS ARTICLE IS UNFINISHED

Q: We're in the middle of the pandemic... Is there something fun and useful that we can learn on our own?

Q: I need to buy an Arduino or a Microcontroller Board? And have it shipped sloooowly to me at exorbitant prices?

A: Nope! Today we can build and test Embedded Programs in a Web Browser... Without any Embedded Hardware! Made possible with awesome WebAssembly tools.

A: We have a real PineTime Smart Watch that's connected to the web for everyone to test our Embedded Programs... Try it for yourself and compare!

A: Not any more! Today we'll code with Rust, a friendly, modern language. (And less frustating for new coders)

Q: Great! But my computer is kinda old, slow and weak... Do I need a powerful Linux desktop?

A: Any Linux, macOS AND Windows computer works great for coding in Embedded Rust and WebAssembly... Even a Raspberry Pi!

If you prefer zero setup, we can build our Embedded Rust and WebAssembly programs in the Cloud! (Provided free of change by GitHub Actions and GitLab CI)

It feels strange... But building and testing Embedded Programs will work on a Mobile Web Browser!

Today we'll learn to build a Smart Watch Face in Rust. We'll be coding for a Smart Watch with Colour Touchscreen, Bluetooth Networking and Real Time Clock... Just like the expensive watches by A***e and S*****g!

As promised, our Watch Face will run in a Web Browser, so it will be easy to test and troubleshoot.

And when you're done... Please flash your Watch Face to our Remote PineTime over the web. Show the world your embedded creation... Running on a real watch!

Q: But what's the catch?

None really. Now's the perfect time to Learn and Experiment with Embedded Programming... At our own pace, with whatever materials we have.

Read on and join me for the learning adventure! :-)

Let's make a Hand-Drawn Watch Face like the pic above. The Watch Face consists of 4 hand-drawn images that will be a-changin' with the times...

We start by zooming to the top left...

How shall we load the top left image... With the first digit of the hour?

Here's how we do it in Rust: src/lib.rs

Yep it looks daunting... These are the 3 hardest lines of code in our Watch Face!

But let's step through each line bit by bit and uncover the mystique of Rust.

(I promise you... The rest of the code will be much simpler!)

Given an hour like 23, compute the first digit i.e. 2. How shall we do this in Rust?

(We'll learn the backstory of state in a while... And objects in Rust are named Structs)

Here we divide the hour by 10 (and truncate the result) to get the first digit.

The Type of digit is missing. Is Rust a Typeless Language like JavaScript and Python?

Rust is a Statically Typed Language like C... All Variables have known Types during compilation. The Rust Compiler infers the Types for us.

Sounds spooky, but the Rust Compiler goes all Sherlock Holmes on our code to deduce our Variable Types...

I see what you did there... digit doesn't have a known type! Hmmm hour is a u8... 8-bit unsigned integer... After integer division we get another u8... So I deduce that digit is also u8!

To see this Sherlock smartness in action, mouse over digit in VSCode...

We see that u8 pops up for digit... The Rust Compiler has inferred that digit is an 8-bit unsigned integer. (Like uint8_t in C)

Now that we have the first digit of the hour, let's fetch the hand-drawn bitmap for the digit.

We have digit set to the first digit of the hour (0, 1 or 2). Here's how we fetch the bitmap for digit: src/lib.rs

(We'll reveal our self later... Hint: We're inside an object!)

Thus to fetch the bitmap that corresponds to a digit, we do this...

Rust is extremely uptight about Types... Including the index for our Array self.bitmaps.

In Rust, Arrays are indexed by integers of the usize Type. (Somewhat like size_t in C)

Hence we need to convert (or cast) digit as usize like so...

We're not gonna pass around copies of the bitmap. (Because that would be awfully inefficient in a smart watch)

Instead we're passing a Reference to the bitmap. (Somewhat like a Pointer in C)

This means we're casting the bitmap Reference to a weird Type...

This is a tough nugget to crack (unlike McNuggets)... But we'll learn its true meaning in a while.

(Hint: It's a Pointer (yep like C). And no we're not shopping for French luxury goods.)

Our story thus far: We have bitmap set to the hand-drawn digit (i.e. the first digit of the hour)...

Here's how we set the Top Left Image on our Watch Face to the bitmap: src/lib.rs

Let's savour this chunk by chunk (the old chunky way)...

We have 4 images inside self...

So self.top_left_image refers to the Top Left Image on our Watch Face.

Why the studs in img::set_src?

Rust is fussy about keeping things neat, tidy and modular.

It means we're calling the function set_src defined in the Module img. (Similar to namespaces in C++)

Are we done yet?

Thus to set the bitmap for the Top Left Image we may write...

Why the questionable "?" at the end?

"?" is the Try Operator in Rust. It checks for errors.

If set_src returns an error, Rust stops executing the current function. And returns the error immediately to the caller.

(This is similar to try ... catch ... throw in JavaScript and Python)

Wait! We haven't covered these two sus chunks with *const...

Yep they look highly sus... Is this really Embedded Rust?

Get ready for the shocking reveal...

5 It was C all along

*const is a Raw Pointer in Rust.

It works like a Pointer in C... It's an address that points to an object in memory.

We already have References in Rust (via the "&" operator). Why do we need Raw Pointers?

That's the beauty... Rust and C are interoprapereraberble...

Ahem... Rust and C Functions can call each other!

Both Rust and C are low-level languages. It's perfectly OK to call C Functions from Rust (and the other way around).

That's why some folks are coding in Rust instead of C for creating Embedded Gadgets.

What C Functions are we calling?

Makes more sense when we realise...

Today we won't talk much about casting C Pointers in Rust and passing them to C Functions. More details may be found in "The Rust Programming Languague" book...

Below is a handy map to keep us on track... It shows the code that we have explored thus far. The rest of the code awaits! 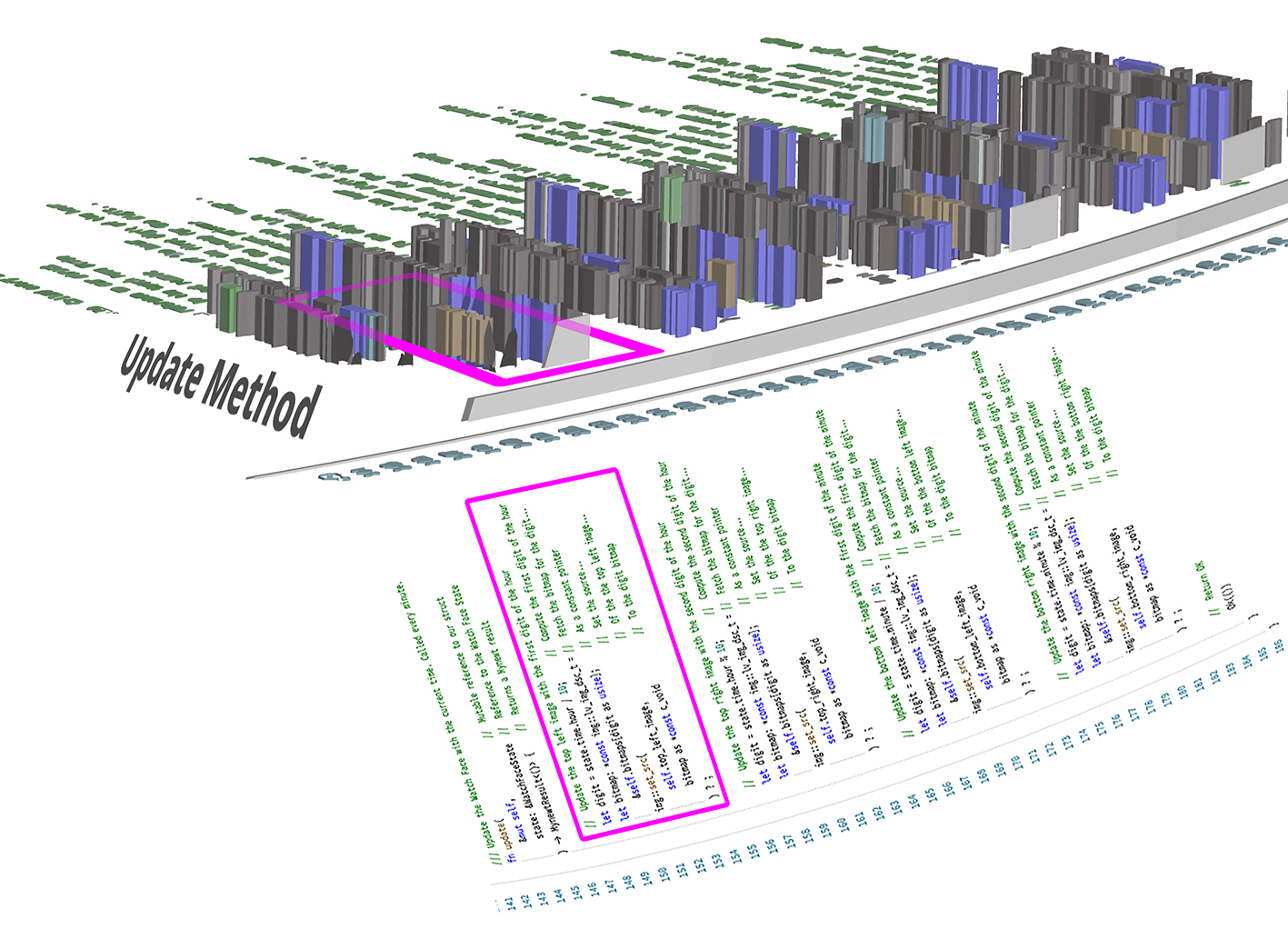 Remember our 3 toughest lines of Rust code... For updating the top left image on our Watch Face?

Let's zoom out and watch how we use them: src/lib.rs 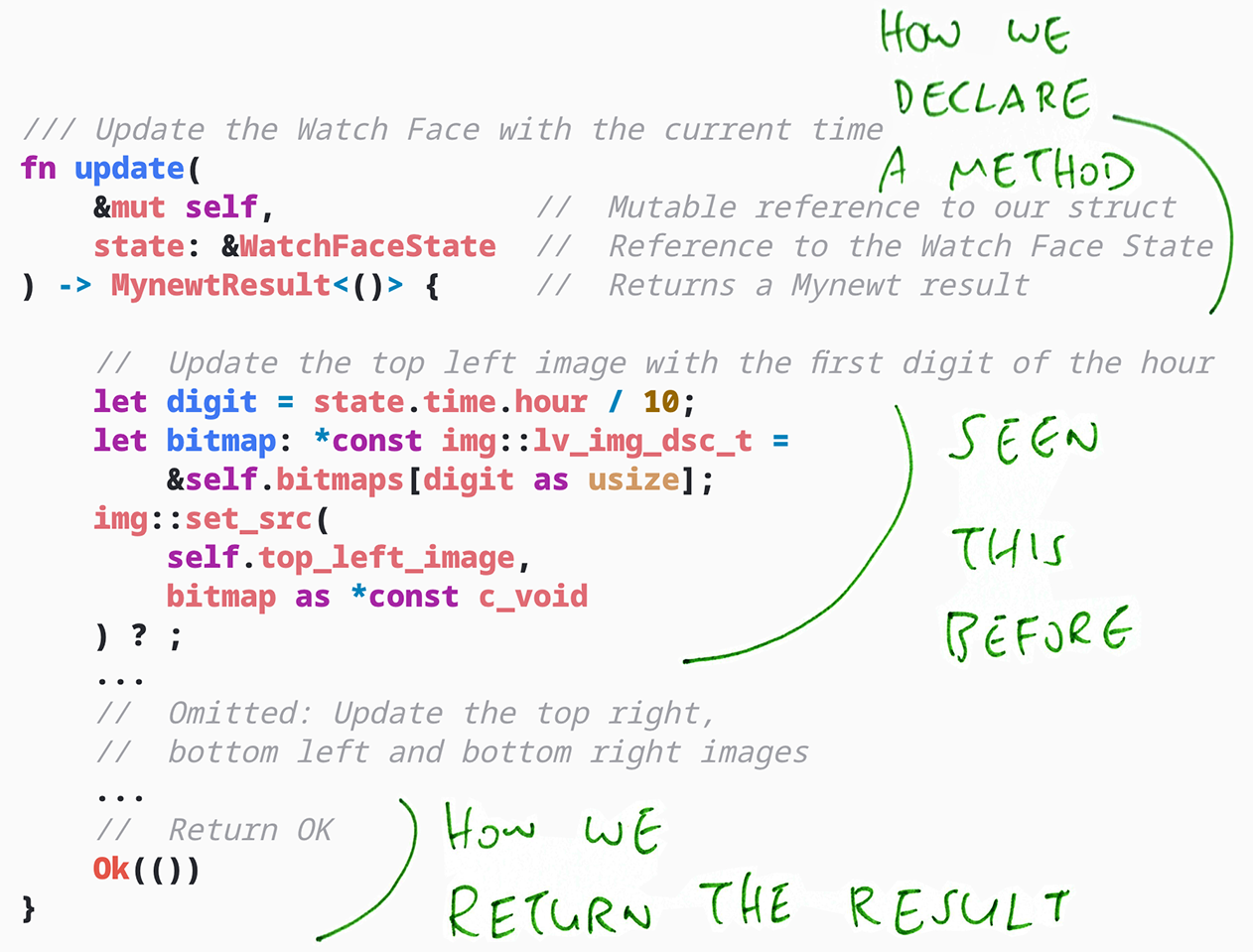 Now we zoom in to the top... Where we declare the update method: src/lib.rs

In Rust we declare a function (or a method) by writing...

(Similar to function in JavaScript and def in Python... But looks more mathematical)

update is the method that's called to update the Watch Face every minute.

What's MynewtResult in the declaration above?

This works only for functions and methods that return the Result Type. Thus we follow the Rust error-checking convention and return a kind of Result named MynewtResult.

Here's how we return the result in our update method: src/lib.rs

We write Ok(()) when we have no result value to return.

Note that we omit the trailing semicolon ";" when returning the result.

The code to update the other 3 images looks similar. Check out the rest of the update method here: src/lib.rs 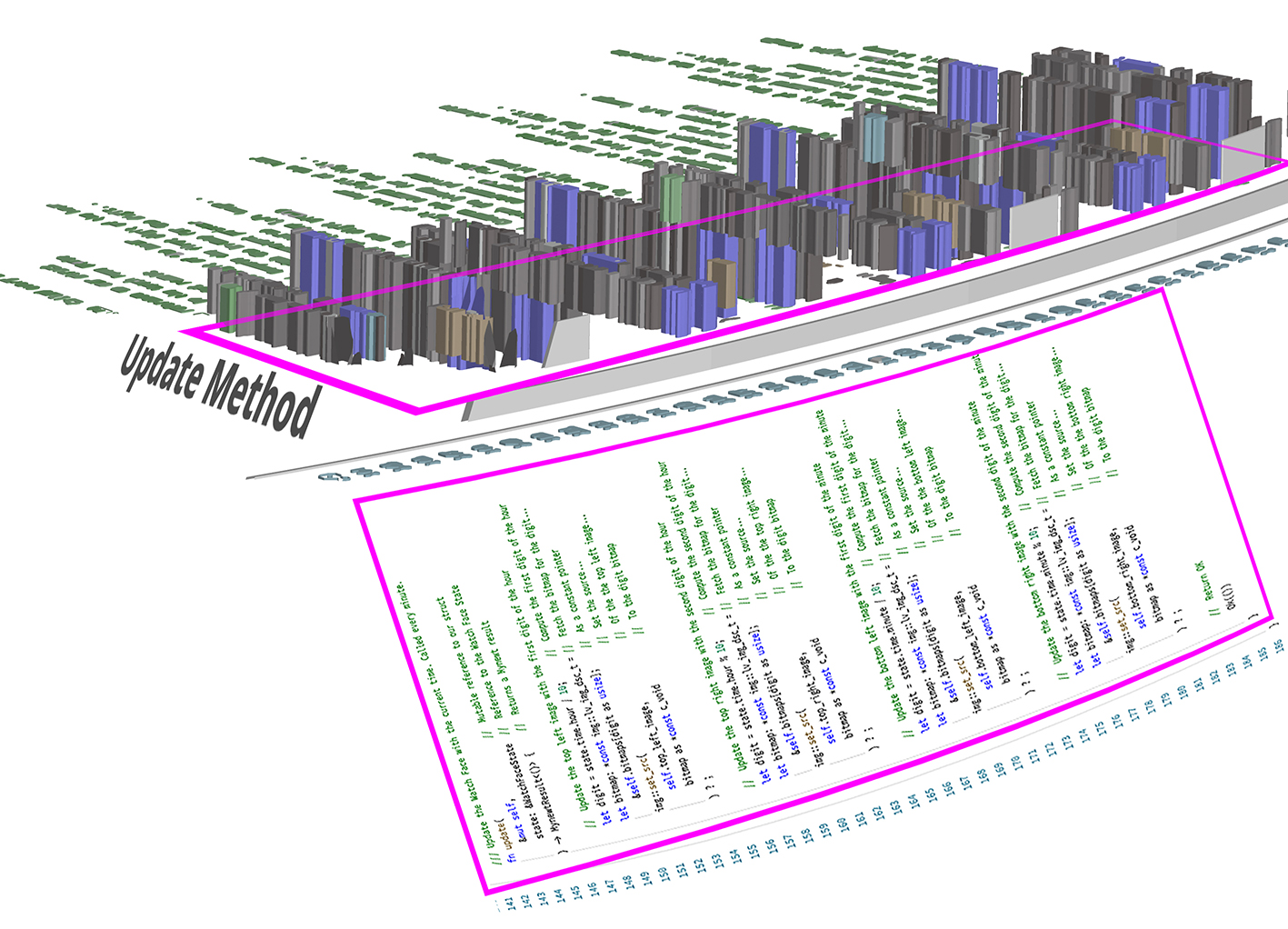 Congratulations! We're done with the update method... That's half of the Watch Face code!

Now we move on to the new method... For creating the Watch Face.

Our Watch Face has plenty of goodies inside (like a Kinder Egg)...

We have used them earlier but...

How are the bitmaps and images created?

We create the bitmap for the digit 0 as a Rust Struct like so: src/lib.rs

(Rust Structs are structured objects with fields inside... Just like Structs in C and Classes in Python)

We're reusing the C Struct lv_img_dsc_t from Module img of the LVGL Library. The lv_img_dsc_t Struct represents a bitmap in LVGL.

(Rust Structs and C Structs are generally interchangeable, with the right settings)

In Rust, we create instances of Structs by writing...

Let's look at the 3 fields inside our bitmap Struct...

(How do we define a Struct and its fields? We'll find out later)

What's 0.bin? Why do we use it with include_bytes?

0.bin is the binary file that contains the hand-drawn bitmap for the digit 0. (Encoded in a special RGB565 format... Which we'll see later)

The file is located in the bitmaps source folder... 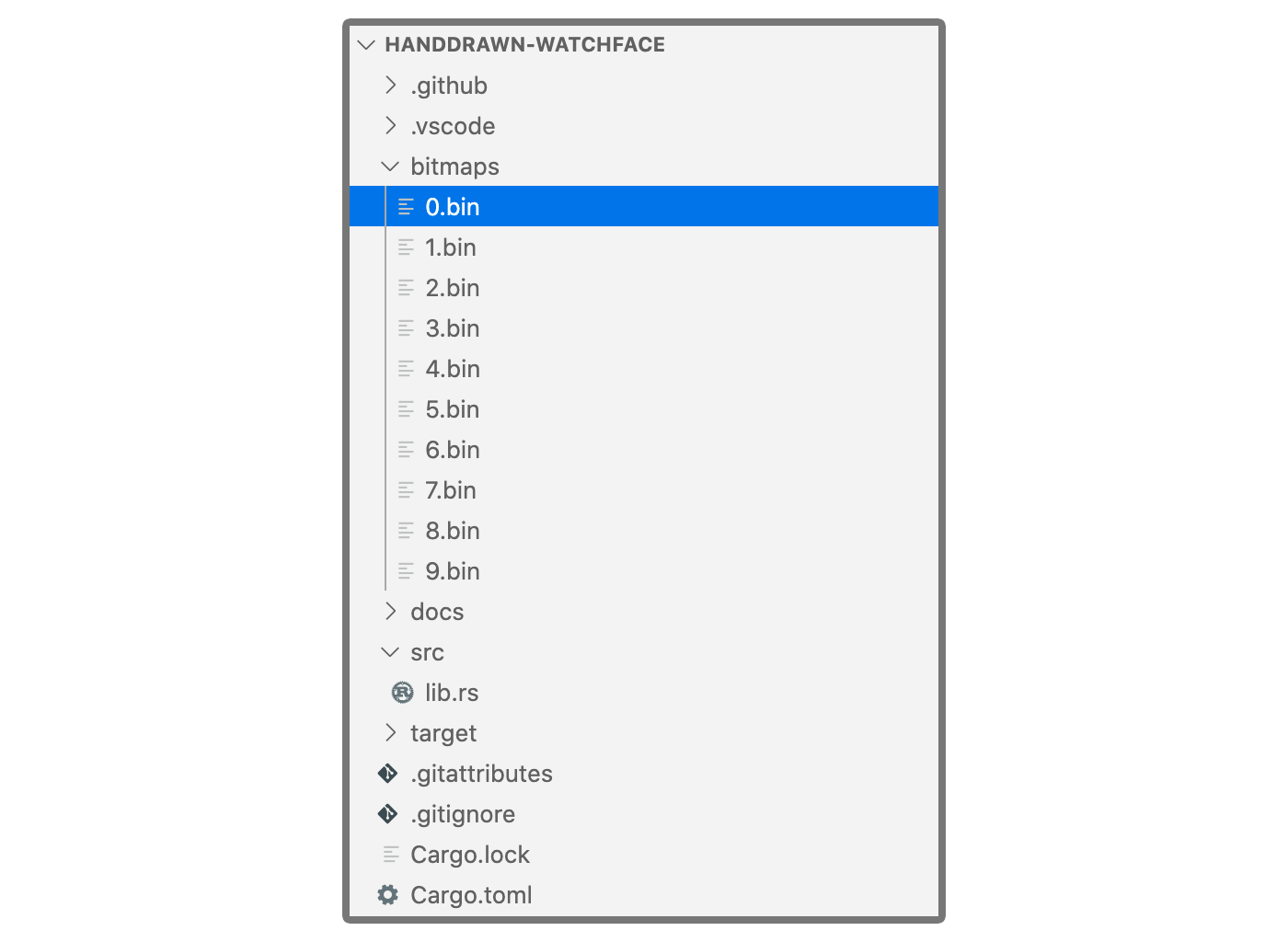 To embed the contents of 0.bin into our source file (at src/lib.rs), we call include_bytes.

Thus the field data will be compiled literally as...

(Yep it looks like #include from C... But works on binary files. Nifty!)

Our bitmap Struct will be passed to a C Function... So we need to convert Rust References to C Pointers.

We write as *const u8 to convert the binary contents of 0.bin from a Rust Reference to a C Pointer.

Why is there a "!" after include_bytes?

Because include_bytes is a Rust Macro (not a Rust Function). It's interpreted by the Rust Compiler while compiling our Rust code.

Rust makes it so breezy easy to embed binary files (like bitmaps) into our Watch Face... Thanks to include_bytes!

We've seen how the data field is loaded from the bitmap file 0.bin: src/lib.rs

We move on to the next field data_size, the number of bytes in the bitmap file.

In RGB565 Encoding, each pixel is represented by 2 bytes of colour data.

There's something odd about data_size... Shouldn't it be:

That's a handy short form in Rust... When creating Structs, we may omit the value if it has the same name as the field.

So the above code may be simplified as...

Let's talk about header, the header for our bitmap...

According to the definition of the lv_img_dsc_t Struct in LVGL, we need to provide a header field that describes...

We have seen this code for loading the bitmap for the digit 0...

bitmaps is the array of bitmaps that we have used earlier.

This code appears at the end of the new method for creating our Watch Face... 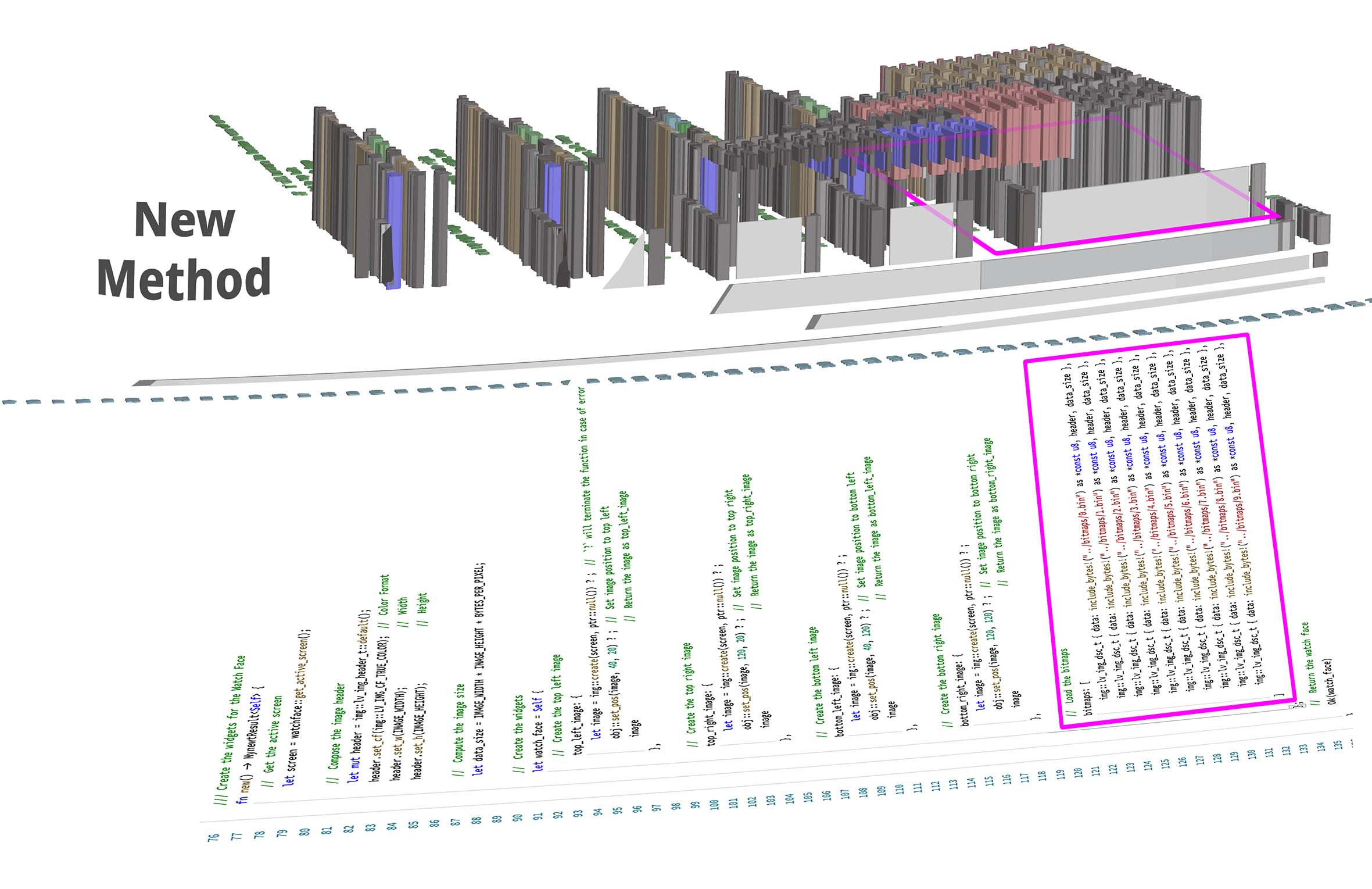 Let's study the rest of the code in the new method...

We create the top left image like so: src/lib.rs

This form of Rust looks unusual, but think of it like this...

In Rust the curly brackets { ... } represent a block of code.

Every block of code in Rust evaluates to a value. Here the last line of code in the block, image, is returned as the value of the block. (Note that the semicolon ";" is omitted when we return values)

screen refers to the current active screen in LVGL.

screen is defined in src/lib.rs as...

And that's how we create images in the new Method.

The code is located in the middle of the new Method... 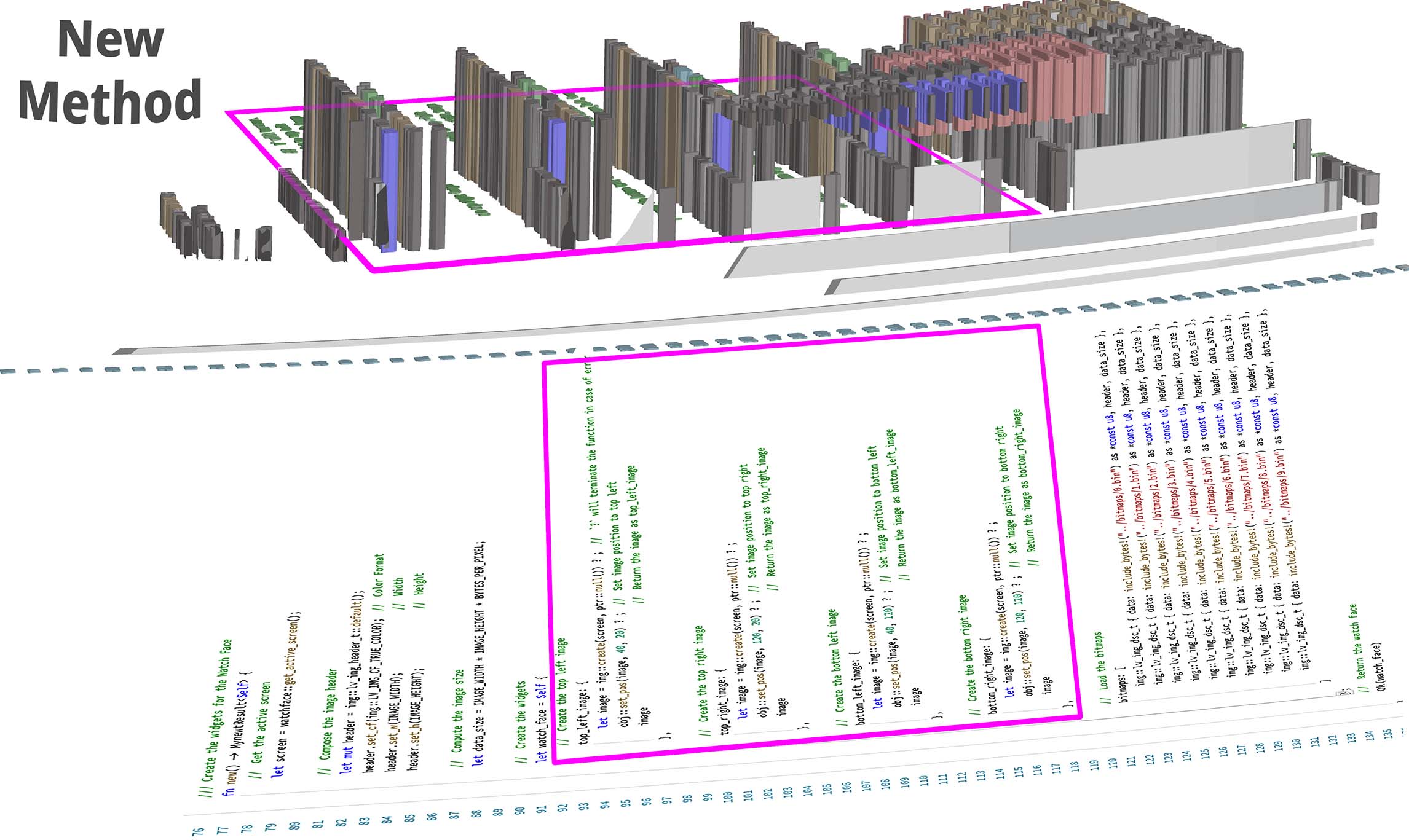 We have seen various parts of the new Method... Let's wrap them all up into a proper Method Defintion: src/lib.rs

Which means that the method returns either a Watch Face (i.e. Self) or an error (i.e. Err)

Why does Self refer to the Watch Face?

We'll find out in a while. 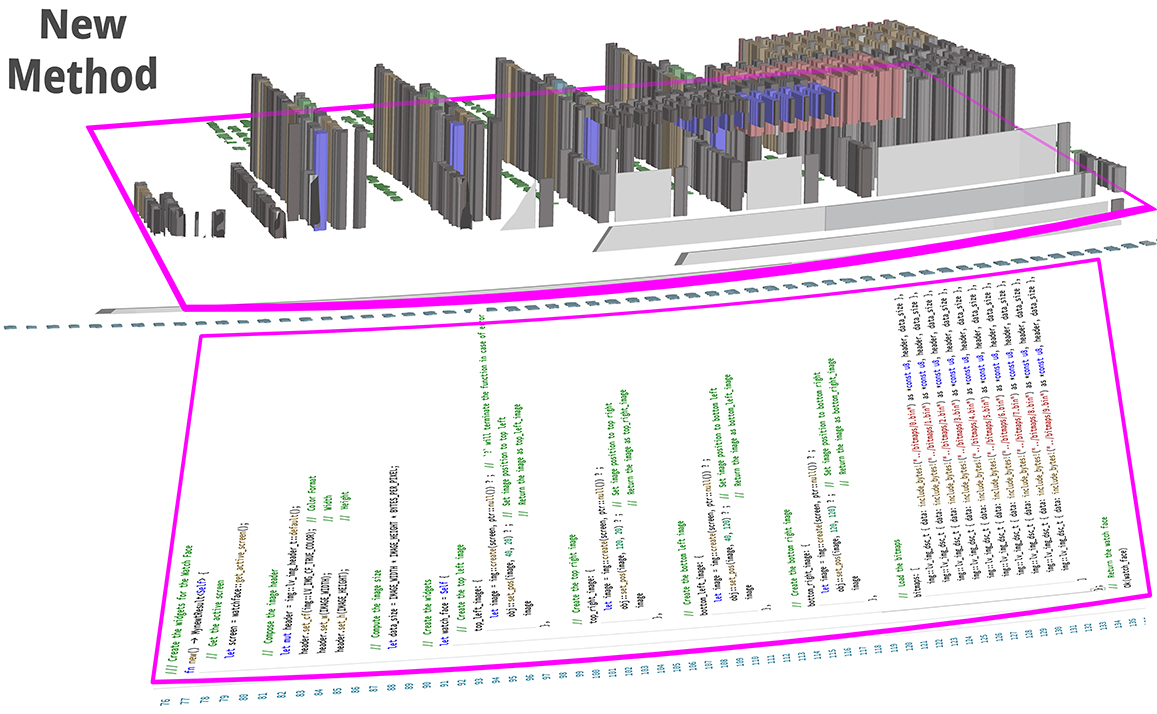 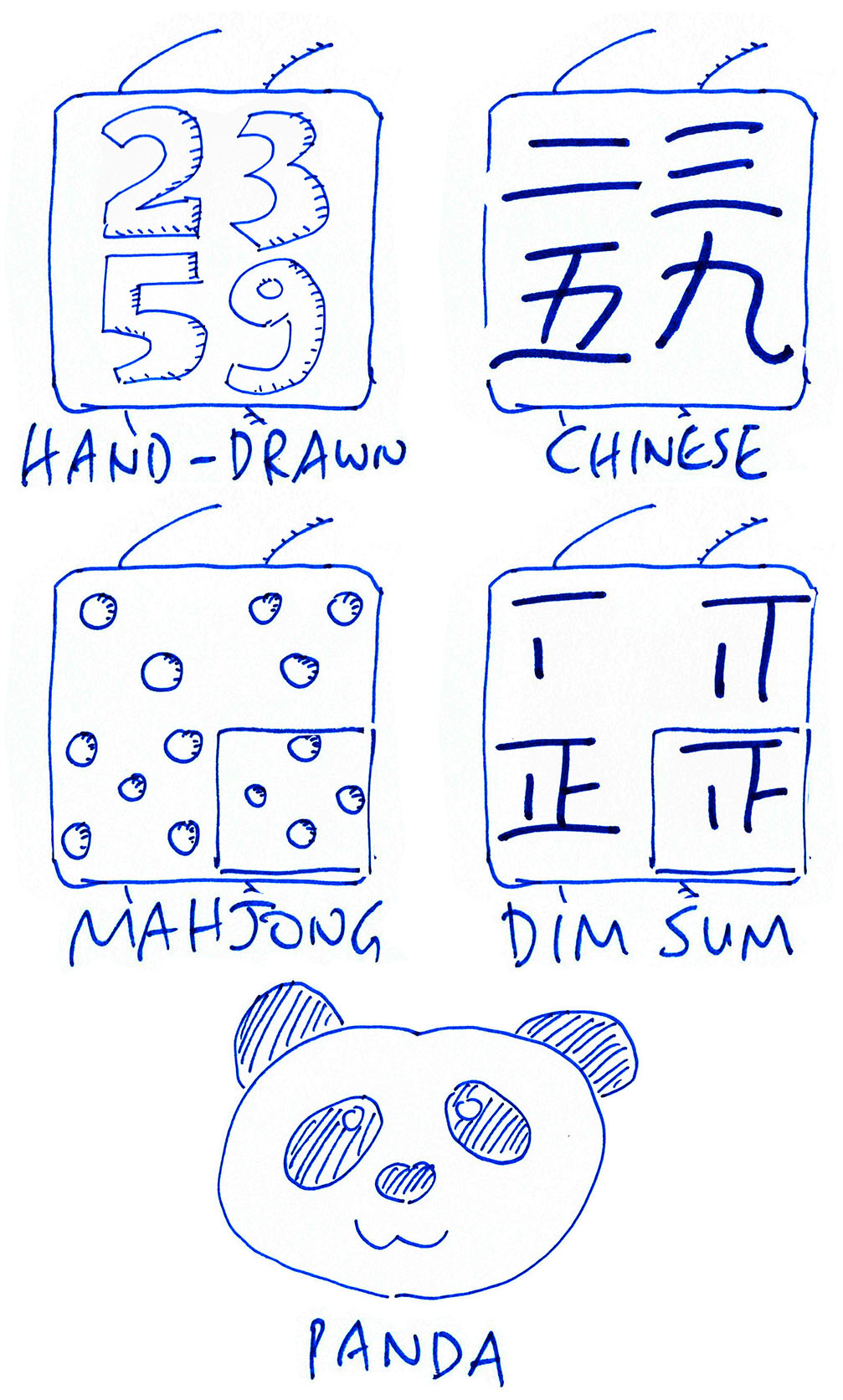 In the meantime, please go right ahead to create your own Watch Faces and publish them on crates.io... So that all PineTime Owners can share, learn and enjoy :-)

Got a question, comment or suggestion? Create an Issue or submit a Pull Request here...